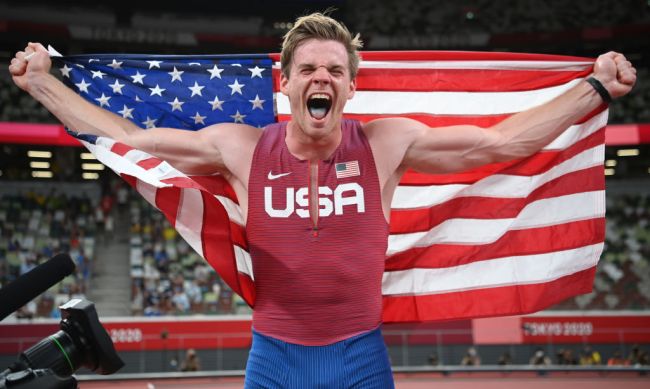 The United States of America dominated the Tokyo 2020 Olympics and there is no debate to be had. Team USA won both the overall medal count and gold medal tally (in walk-off fashion), but China is trying to spin a different narrative.

Entering the last day of competition at the Tokyo Games, the U.S. was trailing China 38 to 36 in the gold medal count. Team USA went on to crush Japan in women’s basketball and took gold for the first time in women’s volleyball and track cycling.

Meanwhile, China fell short in rhythmic gymnastics and women’s middleweight boxing. As such, the U.S. officially and definitively topped China in the gold medal category, winning 39 to 38.

There is no question about which country won the most gold medals. It was the United States. Not China.

The top 5️⃣ in the medal table from the #TokyoOlympics! pic.twitter.com/aZieHc1Ftq

However, the Chinese state media has another idea and altered those figures in a way that asserts itself as the gold medal leader.

According to The Taiwan News, some graphics even show China as having won the overall medal count by including a third territory of Macau.

“Congratulations to the Chinese delegation for ranking first in gold medals and the total number of points,” state media wrote.

Under official International Olympic Committee rule, Hong Kong, Taiwan and Macau compete as independents. The IOC does require Taiwan, an independent country that the Chinese Communist Party claims as part of China, to compete as ‘Chinese Taipei.’

The bottom line is that not one of Hong Kong, Taiwan or Macau are lumped into China’s medal count. They are not China.

No matter how delusional China chooses to be, the United States of America won both the gold medal count and overall medal count at the Tokyo 2020 Olympic Games.

Team USA has won the most overall medals at seven consecutive Olympics, but China won the most gold medals in Beijing in 2008.

U.S. women won 66 of their country’s medals— more than half of the total tally. If American women were an independent, separate country, they would have ranked fourth in the world in the overall medal count.

All in all, it was an impressive showing from the United States that cannot be twisted. The Stars and Stripes came back to walk-off the Olympics and not even Chinese state media can take that away…

…because it is just blatantly incorrect propaganda.