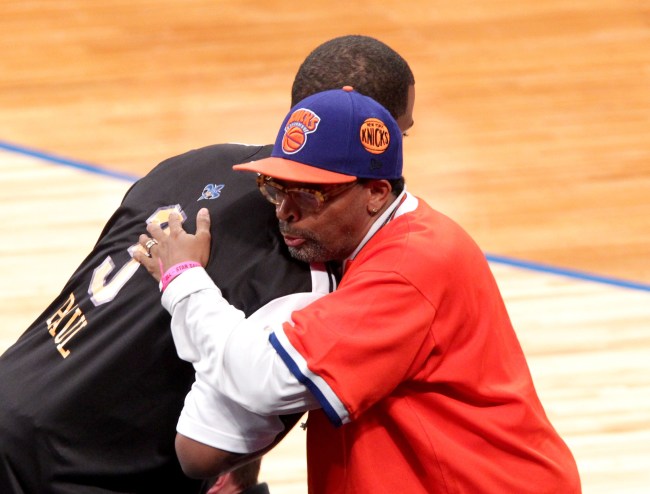 A Chris Paul trade was rumored for months, with the All-Star point guard looked at as a hot commodity to join a playoff-bound team. He was linked to the Lakers for months, but, when all was said and done, the Phoenix Suns came in and snatched him up, pairing him with young stars like Devin Booker and Deandre Ayton.

Paul being shipped to Phoenix by the OKC Thunder was a bit of a surprise given the fact that the franchise is more up-and-coming rather than a legit title contender. At this point in his career, one would think CP3 only wanted to chase rings — hence why the Lakers made so much sense — but that didn’t happen. However, other than the Suns, one team believed to be linked to Chris Paul was the New York Knicks, who haven’t sniffed a playoff berth in over a decade.

Even so, the Knicks are a storied franchise, and one of the most valuable in all of sports, so it makes sense why the allure of New York is something a lot of athletes love. The Big Apple boasts a different kind of energy than anywhere else in the world. It also opens up the possibility of more marketing opportunities off the floor. And, despite all the losing seasons recently, fans still pack Madison Square Garden — well, until the pandemic came along.

With so much uncertainty surrounding the upcoming NBA season and beyond because of COVID-19, nobody knows what live sporting events will look like moving forward. And with fans unable to attend games at MSG, no joke, it factored into Chris Paul’s decision on his trade destination prior to the Suns deal.

According to former baller Matt Barnes, who joined Sirius XM Radio Tuesday morning, Paul wasn’t as interested in the Knicks unless it included the full “Knick Experience.” And because fans won’t be in MSG for the time being, that couldn’t happen. Take a look at what Barnes said.

“We were discussing like, hey, where are you going to go?,” Barnes said on Sirius XM NBA radio Tuesday. “And he was saying the Knicks were an option but, you know, if he was going to New York he wanted the full Knick experience, meaning he wanted the fans, he wanted the essence, he wanted the ambiance of that Madison Square Garden crowd. And going there now, we don’t know if that crowd will ever be back.”

Did the pandemic keep the #Knicks from trading for Chris Paul?

Former teammate @Matt_Barnes22 tells @EvCoRadio, @LegsESPN, & Brad Daugherty what might have kept CP3 from New York and why he'll do great with the Suns pic.twitter.com/gy9DfwYUB2

It might sound silly for Chris Paul to factor in the fans, but, let’s face it, if not for the fans packing Madison Square Garden for the past couple years, what really stands out about the Knicks? Absolutely nothing. They haven’t been winning, and there’s been more fight from the owner with former players than any fight to win games on the basketball court, and Paul sort of recognized that.

Assuming the league allows some teams to play this upcoming NBA season with some fans in the stands, Madison Square Garden is going to look really weird mostly empty. Chris Paul didn’t want to be part of that, and, whether weird or not, it kept him off the Knicks — which is probably for the best after seeing how dysfunctional the franchise has been for such a long time.