Chris Simms Has A Fascinating Hot Take On Why The Giants Really Traded Odell Beckham, Jr. 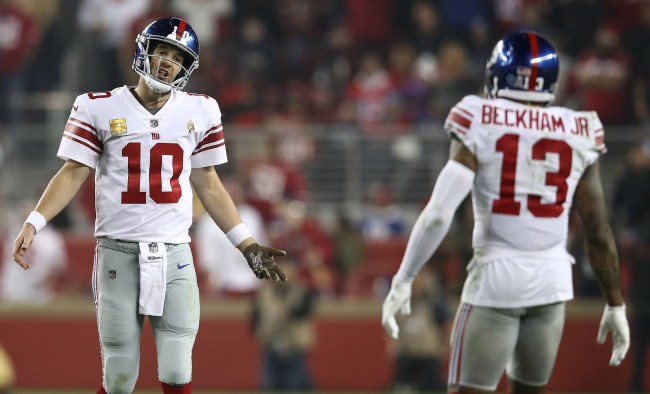 When the New York Giants decided to pull the trigger and trade one of the best wide receivers in the game, Odell Beckham, Jr., to the Cleveland Browns many NFL fans were left scratching their heads wondering why.

Giants fans in particular (even famous ones) were left more than a confused about the deal.

One report that came out following the Beckham trade claimed that even thought the Giants had just signed the wide receiver to a record contract last fall, he had “become too much of a pain in the ass.”

While that explanation is certainly a feasible one, former NFL quarterback, current NBC Sports football analyst, and New Jersey native Chris Simms has another idea for why the Giants decided to part ways with OBJ.

Simms’ take is that the Giants had to trade Beckham because OBJ “exposed” Eli Manning’s weaknesses as a quarterback.

He explained his theory to NJ.com…

“When you are doing this,” Simms said waving his arms in the air, “I think Odell Beckham brought great pressure not only to Eli Manning as the starting quarterback but to the Giants organization as a whole.

“Because they realize everybody else in football — and people like me who study football really hard — is going, ‘You got a receiver who can be the greatest receiver in the history of the sport and, man, are (you) leaving a lot of plays out there on a weekly basis.’ Not only would Odell Beckham be doing better for himself but the offensive team would be doing better as well if you can capitalize on that.”

In this installment of Read Shurmur’s Lips: “What? Throw it to Odell.” That was the design. Nice job by Falcons’ Sharrod Neasman of getting close enough to Beckham to make Eli hold the ball. pic.twitter.com/hTmD2ThhPX

“I think, realistically, Eli’s play over the last two years has been below average,” Simms said. “I understand it hasn’t the been best help around him at times, but I’m also not going to sugarcoat things and say he is not at fault in some of these situations as well.”

“I think he’s such a huge star, such a great talent, they probably know he is going to be frustrated at times when he is not getting the ball and he is wide open down the field,” Simms said. “And it’s calling attention and is a distraction in itself. I think that is certainly one of the reasons they’ve moved on.”

One thing’s for sure, the 2019 NFL season is going to be very interesting to watch if you’re a Browns or a Giants fan.