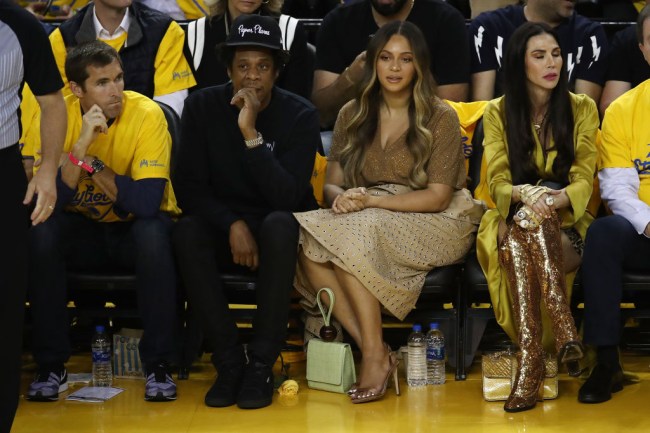 In the wake of the George Floyd tragedy, activists, athletes, protestors, and Black Live Matters advocates have used countless different ways to bring more attention to race and inequality issues in the United States.

Some people still choose to ignore the issue, turn a blind eye, and hope the protests and riots slowly go away.

Trail Blazers shooting guard CJ McCollum took a different approach to grab the attention of uninterested outsiders – he used the famous faces of Jay-Z and Beyonce.

McCollum retweeted a thread from the Twitter handle @IVYPARKSPR that shows a picture of the famous couple with the caption “Proof that Beyoncé cheated on Jay-Z: A THREAD.”

A celebrity gossip tweet of this level would surely get the attention of thousands of people. And it did, but for all the right reasons.

The thread that follows had nothing to do with the Mr. and Mrs. Carter, but instead, shares links to vital information on how to get involved and make a difference following the death of George Floyd and the killing of countless others.

Proof that Beyoncé cheated on Jay-Z: A THREAD pic.twitter.com/GDFETokYPQ

@Change your website is crashing!! Please work on it!!

Among the links included in the thread are petitions to Reform American Police Departments, mandates that will force all police academies cadets to take tests on racial bias, and justice for

The entire thread can be found here.

McCollum’s team also released a statement to express their sympathies for not just Floyd’s death, but also that of Breonna Taylor and Ahmaud Arbery, who tragically lost their lives.

On McCollum’s personal Twitter account, the Blazers’ star expressed his feelings on Drew Brees’ tone-deaf comments yesterday about kneeling for the national anthem and said the world needs more people like Aaron Rodgers and less people like Brees.

We need more @AaronRodgers12 and less @drewbrees. Ignorance is not an excuse. You have to hand off the ball and throw to those same teammates you refuse to stand up for.

“Ignorance is not an excuse,” explains McCollum. “You have to hand off the ball and throw to those same teammates you refuse to stand up for.”

Rodgers made a statement yesterday explaining that Colin Kaepernick’s kneeling have never been about a flag or an anthem.