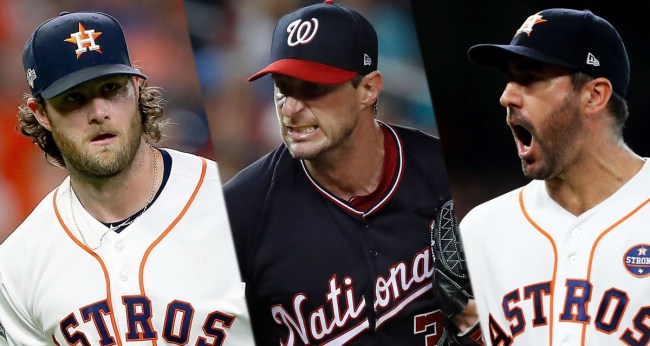 Fired Los Angeles Angels clubhouse attendant Brian Harkins, who was with the team almost 40 years, says Gerrit Cole, Justin Verlander, Max Scherzer and others use forgeign substances when they pitch – and Major League Baseball knew about it.

Harkins, who was fired by the Angel in March of 2020, after MLB informed the team that he was supplying some sort of sticky substance to illegally help pitchers claims in a lawsuit filed in August against MLB that he is unfairly being depicted as “a scapegoat.”

On Thursday, a text message from Gerrit Cole to Harkins, known to players as Bubba, was submitted as evidence and it read, “Hey Bubba, it’s Gerrit Cole. I was wondering if you could help me out with this sticky situation [winky face emoji]. We don’t see you until May, but we have some road games in April that are in cold weather places. The stuff I had last year seizes up when it gets cold …”

Vince Willet, a former Angels clubhouse attendant, has also said in the past that the substance was regularly available in the Angels’ clubhouse.

Harkins, who began work as a clubhouse attendant for the Angels in 1986, was allegedly taught how to make the substance by Percival.

Reds pitcher and 2020 National League Cy Young Award winner Trevor Bauer, long a vocal critic of cheating in Major League Baseball, has repeatedly over the past several years accused numerous pitchers of doctoring baseballs with illegal substances to increase spin rate. He even went so far as to state his belief that “over 69 percent” of MLB’s pitchers are cheating in this fashion.

Bauer has also alluded in the past that the Houston Astros pitchers were some of the biggest culprits, with Dallas Keuchel, Charlie Morton, Gerrit Cole, and Justin Verlander all becoming almost unhittable (or even more unhittable) after they joined the team.

Verlander, who very loudly complained about cheating in baseball, once going on a profane rant about it, was suspiciously silent as the Astros were going through their sign-stealing scandal.

According to a November report by The Athletic, one player development executive told them that most pitchers in Major League Baseball have been using some sort of substance because “it’s better than steroids.”

One coach even went so far as to say, “My guess on total MLB players using some sort of grip enhancement … 99.9 percent.”

They should just legalize it. Realistically the only way to solve the problem