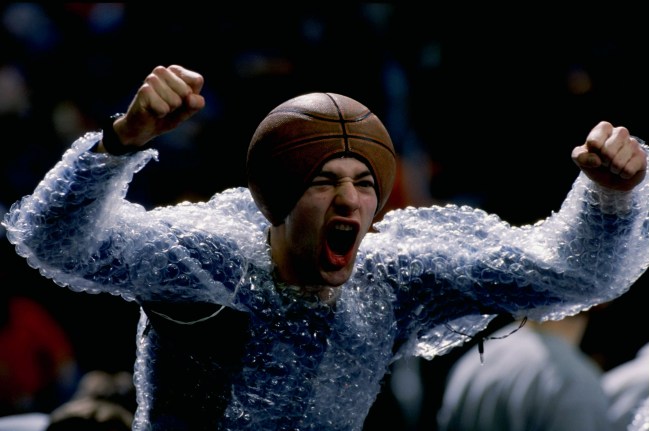 Just look at that crazy college basketball fan in the photo above and ask yourselves if you have major FOMO that we all didn’t get to show such debauchery during March Madness this year. Yep, there’s no denying that 2020 has really sucked ass; especially when it comes to being a sports fan. But, fret not, because the NBA Playoffs are about to start, MLB baseball is… well, slowly churning along, and I think the NFL is actually going to kick-off as planned (despite so many risks). So that’s something to look forward to.

While college hoops fans were void of the NCAA Tournament this year — and nobody knows for sure what might happen to the winter sport now that college football is all fucked up because of concerns over COVID from Big 10 and Pac-12 schools, among others — there might be on genius idea that could give us the college basketball madness we all deserve.

According to ESPN, some guy named Rhossi Carron, who runs the U-Sports Group, a Houston-based sporting event company that is scheduled to host two non-conference events this season in Texas, has proposed the idea of a “Battle in the Bubble” tournament-style format, with 20 college hoops teams participating in playing an entire non-conference schedule in three weeks in later this year.

The ESPN piece cites that at least 50 college basketball teams have been pitched the idea from Carron, meaning this could legitimately be something that could come to fruition by December.

It’s believed to be the first detailed bubble proposal sent to programs for the 2020-21 college basketball season.

“Nothing is bulletproof, but based on what medical professionals are telling me, a bubble might be the only way to do it,” Carron told ESPN. “Our goal is to create a safe, controlled and competitive environment that places priority on the safety of the student-athlete.”

According to Carron’s plan, 20 teams would be invited to the bubble, split into two 10-team divisions. With most campuses ending fall semester before Thanksgiving break, the teams would quarantine as a group on their own campuses for seven days following the departure of the general student body, then quarantine in the bubble for three days upon arrival.

All meals would be eaten on campus, nobody would be allowed in or out of the bubble and the event staff would provide video games and activities for the teams during their downtime. NBA scouts would be permitted to attend, but they must follow the same guidelines as event staff.

So, basically, college basketball would have a mini version of the NBA bubble, with an early taste of March Madness coming with the 20 teams that could potentially compete in this event. Honestly, there’s no excuse whatsoever as to why this shouldn’t happen. Bring tutors. Bring support staff. Bring all the COVID tests. Bring the best teams in the country and let them duke it out in the greatest pre-NCAA Tournament ever created.

Who needs preseason or early season invitational tournaments when we can have this? Honestly, college basketball fans (and its players) need this. And, while I’m personally skeptical it will happen, you’ve got to admire the progressive thinking of this Rhossi Carron dude. Especially because he’s pretty realistic about the fact some college kids probably can’t isolate for a long time; but they could for three weeks with a rapid amount of games during that timeframe.

“Can college kids bubble for three months? Probably not. But I think they can do it for three weeks,” Carron said.

With Kentucky head coach John Calipari recently saying he does believe a hoops tournament could be played inside a bubble, maybe this is the way to do it safely and isolated from others on campus. And, because a NCAA hoops executive offered optimism about the NCAA Tournament absolutely happening in 2021, it’s fucking amazing to see competent thoughts by leaders who are planning this stuff for college basketball — which is still a few months away from even tipping off, but is a nice change from some of the PR crap we’ve heard from college football leaders over the past few months.