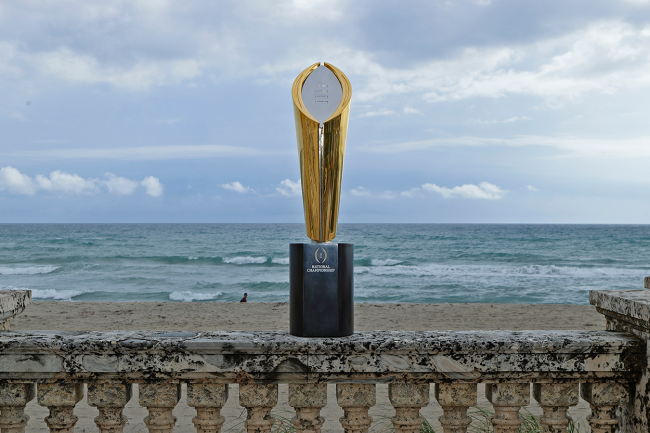 The eight-team College Football Playoff expansion model is reportedly all-but dead. According to Sports Illustrated’s Ross Dellenger, a new model has been proposed for expansion and is currently being mulled by CFP leaders.

Per Dellenger, a group of conference commissioners met last week and introduced a new “alternate” 12-team postseason model. The expansion is very similar, if not almost identical to a model that a subcommittee introduced over the summer.

However, there is one major difference.

To complete the field, six teams will be granted at-large bids based on rankings. That was the same with the subcommittee’s model.

During the meeting last week, per Dellenger, commissioners “scrapped any possibility” of an eight-team playoff. An eight-team model was previously considered a long-shot that lacked support anyway.

This new, alternate proposal is the latest wrinkle in an on-going saga that began in June. A subcommittee of commissioners announced the previously-discussed 12-team proposal but faced pushback from the recently-established “Alliance” of the Pac-12, Big Ten and ACC.

According to Dellenger, it was “the Alliance” that introduced this new, alternate 12-team format last week.

Here’s what that means:

When the initial proposal was introduced, the Pac-12, Big Ten and ACC were scared that their teams would be passed over in the “auto-qualifier” group by a higher-ranked conference champion. To counteract their cowardly fear, “the Alliance” proposed a model that guarantees at least one school from each conference to automatically qualify.

As for a potential timeline, commissioners are expected to meet again in December. Dellenger says that they will discuss three things in terms of the Playoff:

Per one athletic director who spoke to Dellenger, “it’s 12 or back to four.” CFP leaders have about two months to decide on either implementing an expansion that would begin in 2024, or shelving expansion until 2026.

According to Dellenger, the majority of commissioners are on board with the subcommittee’s proposal. However, the alternate 12-team model is viewed as a compromise to appease the lily-livered Pac-12, Big Ten and ACC.