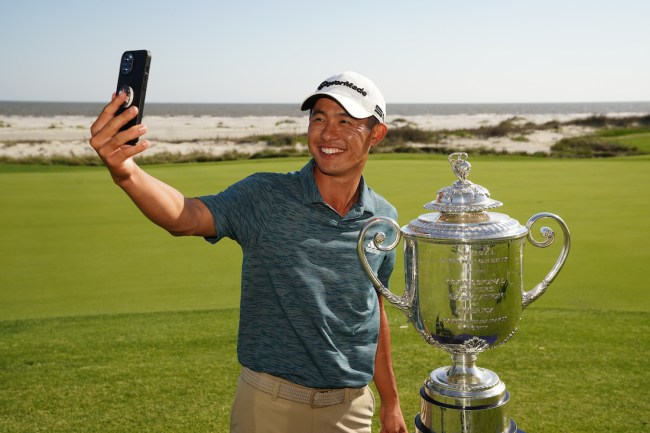 After Collin Morikawa became a major champion last year, winning the 2020 PGA Championship at TPC Harding Park near his college campus at UC Berkeley, the now 24-year-old’s world changed for the better. He was much richer. He was now mentioned among other golf icons like Tiger Woods and Jack Nicklaus. He was touted as a rising star on the PGA Tour.

Those things are all really awesome and all, but one of the coolest opportunities for Morikawa is getting the chance to pick the food that will be served on the PGA Championship Dinner Menu for all the previous champions — a tradition we all know well from The Masters, but often forget about at the PGA Championship.

Imagine having that type of influence just days before the tournament begins. That’s pretty awesome for a guy who looks like he should still be in high school. And, since you’re probably wondering what the hell Collin Morikawa actually has on said menu, here’s a tweet highlighting some of the fantastic choices.

Now, look, I’m no professional foodie or anything, but I’m a dude who appreciates fine dishes. And after seeing what Collin Morikawa has offered up on the PGA Championship Dinner Menu, I thought of one thing: Let’s give the kid a grade for his choices.

Using a standard grading system of A+ to F, take a look below to see how the young Morikawa did (in my eyes) on compiling the menu for all the former champs prior to this year’s PGA Championship.

The decision to go with Harding Park Clam Chowder gets some style points since, you know, it’s the golf course where Collin’s life changed forever. Do I personally like Clam Chowder? No. Was I invited to the PGA Championship Dinner? No. But I’m assuming other people enjoy these types of clammy, fishy-tasting soups, so it’s got to be a good addition to the menu.

In the history of mankind, when the hell as a Cobb Salad not tasted great? Oh, right, never. For that reason, kudos to Morikawa for keeping things simple with the choice here, which adds all sorts of flavors to everyone’s tastebuds.

Remember how I said earlier that I wasn’t a foodie? Uh, yeah, that means I’ve got no idea what the hell “pan seared cobia” actually is. But thanks to a quick little Google search, I found that it apparently “tastes great”, even being touted by people online as the “most delicious, premium white fish.”

In other words, it sounds fancy, so it’s probably good. But because I’ve never had it, the Collin Morikawa takes a bit of a hit on the grade.

I’m from Nashville, so if Morikawa got that real, authentic, juicy, tasty southern fried chicken, than there’s only one grade that should be considered: An A+. With this year’s PGA Championship being played at The Ocean Course at Kiawah Island in South Carolina, I’m willing to bet this southern fried chicken was no joke.

Nobody has ever said no to Porterhouse steaks, so there’s absolutely no one on earth who has ever turned down platters of Porterhouse steaks — which Collin Morikawa had served at the PGA Championship Dinner. That’s… amazing. In fact, when grouped with the other options already listed, everything else on this menu could’ve easily just been dog food and it still would’ve been an incredible dinner overall.

It’s cheese. It’s creamed spinach. It has to be amazingly delicious. Then again, That’s a helluva lot of creamy stuff on the menu here, so I’d imagine a few of the attendees felt a little bit overwhelmed with that. Maybe Collin should’ve considered ditching this item for something a little less heavy. For that reason, he gets only a passing grade.

There’s a reason why Brussel Sprouts are hated by so many people: Because their bitter taste and stinky smell isn’t something most of us enjoy. Sure, this is my own personal opinion, but, c’mon, I’m the one putting together the list here, so I get to decide what is and isn’t a good choice.

Are these generic, country club-made mashed potatoes, or are they the real homemade kind that your grandma makes on Thanksgiving? I’d love to think it’s the latter, but I can’t really envision Collin Morikawa’s grams back in the kitchen at The Ocean Course stirring a pot of potatoes for hundreds of guests. So, assuming these are the country club option, sorry, but they only get a decent (not exceptional) grade.

Nothing to write home about here, as asparagus is neither here nor there — especially when considering some of the other items Morikawa has on this dinner menu. For some, this is solid. For others, it’s one of those “I’ll just keep passing the dish to my left” sort of items. Either way, it’s not going to get a rousing reaction from anybody since, well, it’s just asparagus.

Notice this isn’t just “homemade ice cream,” but, instead, “homemade ice creams” with an “S”, meaning Morikawa gave his guests options on which flavor they desired most. That’s a solid touch of creativity and customization by the young golfer — and one that doesn’t get unnoticed by me. Instead of skipping corners and just choosing his favorite flavor, Collin gave the choices of chocolate, vanilla bean and banana, so there’s bound to be an option for everybody.

Once again, there’s that word again: Platters. This time it’s not just about the delicious, juicy Porterhouse, but, instead, about the warm chocolate chip and red velvet cookies. I’m a fat kid at heart, so this is obviously something that perks me up.

Like, if I were a pro golfer who needed to compete in this year’s PGA Championship, this last thing on the menu would undoubtedly lead me to stuff myself too much with sugar, feel sick, vomit and probably need to withdraw from the tournament. But, hey, that’s the risk when giving me the choice of mountains of cookies — which is probably part of Collin Morikawa’s plan.