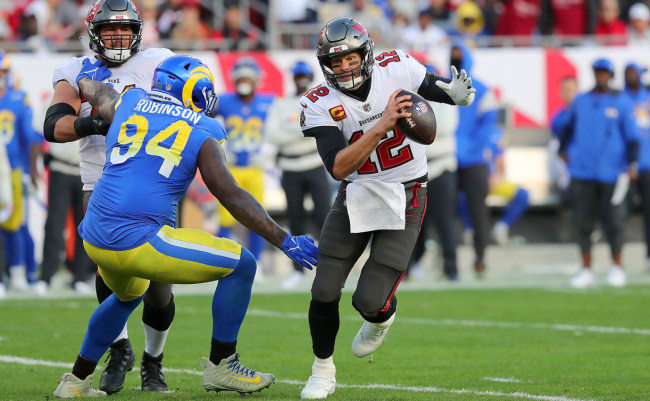 Coincidentally, Brady takes on those very same Rams this week as the Tampa Bay Buccaneers try to right the ship after a mediocre 3-5 start to the season.

This match-up with the Rams will mark Tom Brady’s first game since officially announcing he and his wife of 13 years, Gisele Bundchen, had gotten a divorce.

That constitutes the first part of the Brady vs. Rams theory which was pointed out this week by Marca.com.

For the next part of the theory we head back to February 1, 2022, the day that Tom Brady announced he would be retiring after 22 years in the NFL.

It was also the last game that TB12’s wife Gisele Bundchen was in attendance to watch him play.

40 days after his retirement announcement, Brady was back and the speculation about his relationship with his wife Gisele was off to the races.

Gisele: “Tom can you please retire and come help me raise our kids?”

What is it about playing the Rams that makes Tom Brady’s life always seem to change direction?

The third leg of this wobbly conspiracy theory harkens back to February 3, 2019 and Super Bowl LIII at Mercedes-Benz Stadium in Atlanta.

Guess who Brady played in that game? The Rams.

While he won the game 13-3, it was by far his worst performance statistically in a Super Bowl out of his nine appearances in the game. It was the only Super Bowl he played in where he didn’t throw a touchdown, and it was his last playing for New England. A year later, he was gone from the Patriots after 20 seasons.

Brady enters this week’s game against the Rams on just the second three-game losing streak of his career.

The other season in which Brady lost three games in a row? The year after he beat the Rams in Super Bowl XXXVI for his very first championship.

He is also now 0-3 versus the Rams since he began playing for the Buccaneers.

Clearly, the Los Angeles Rams hold some sort of special sway over the direction of Tom Brady’s life… right?