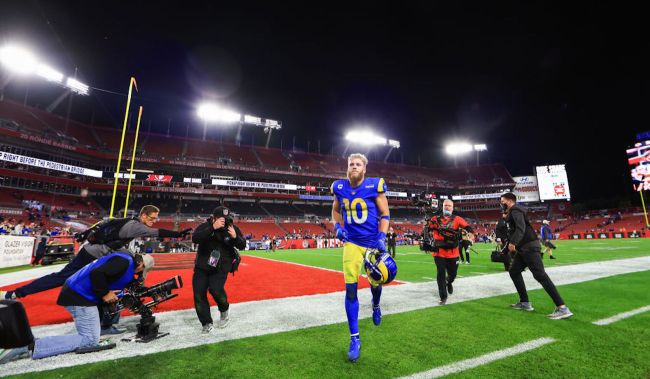 Tampa Bay Bucs players and coaches have confirmed that not everyone on the defense knew the play call when Cooper Kupp caught a 44-yard catch in the final moments of the fourth quarter to put the visiting Los Angeles Rams in field goal range.

Speaking to reporters after the game, Bucs head coach Bruce Arians said that the team decided to blitz Matt Stafford but it wasn’t communicated to all the defensive players, which resulted in the blown coverage.

“Some guys didn’t blitz… It was an all-out blitz. We should’ve gotten a ton of pressure,” Arians said.

32-year-old Lavonte David, who is one of the team’s captains, also confirmed as much in his postgame press conference, saying that some players knew the call and some didn’t.

Bucs decided to blitz Matt Stafford and Bruce Arians said it wasn’t communicated to all the defensive players. Resulted in a coverage bust in Cooper Kupp and a 40 yard pass play. Arians said you can second guess that if you want.

Looked like the only guy who didn’t blitz was Lavonte David. Possible he didn’t get the call from Devin White? https://t.co/cjvh6UMy0v

At this time, it is unclear whether Sunday’s NFC Divisional game will wind up being Tom Brady’s final outing in the NFL, as the future Hall of Fame quarterback has yet to commit to playing next season.

With their victory over the defending Super Bowl champion Tampa Bay Bucs, Matthew Stafford and the Rams will now host Jimmy Garoppolo — their NFC West rival who beat them in the final regular-season game of the year to clinch a playoff berth — in the NFC Championship game in Los Angeles next Sunday.

Meanwhile, over in the AFC side of the NFL Playoffs, either the Kansas City Chiefs or the Buffalo Bills will host Joe Burrow and the upstart Cincinnati Bengals next weekend, who advanced to the AFC Championship thanks to their road victory over the top-seeded Tennessee Titans.

RELATED: The LA Rams Are Already Trying To Block Niners Fans From Buying Tickets And Taking Over SoFi Stadium For NFC Championship Game