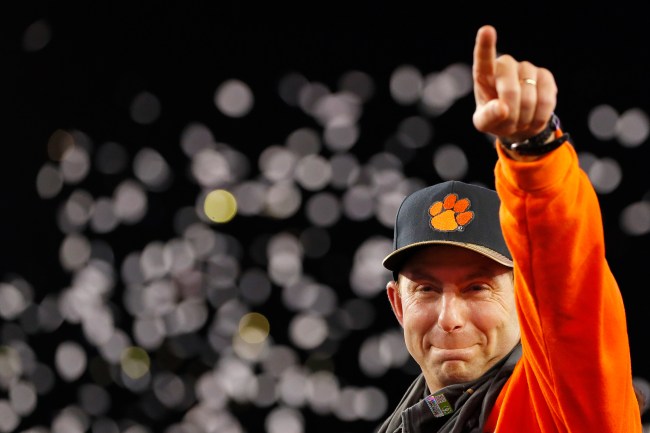 Dabo Swinney has guided the Clemson Tigers to four of the past five College Football National Championship Games, winning two and putting himself in the conversation as the best college football coach on the planet right now. But even though Swinney’s built a top program with Clemson — one that pays him handsomely, with the coach earning $9.3 million annually — there have been recent rumors about the 50-year-old possibly testing the NFL coaching market should certain things happen.

The rumors got started a couple weeks ago when ESPN’s Mike Tannenbaum suggested that Dabo Swinney and his current star quarterback, Trevor Lawrence, could become a package deal should a team like the Jacksonville Jaguars get the No. 1 overall pick in the 2021 NFL Draft. Take a look below at the initial report.

“There’s a lot of speculation that Dabo Swinney, who’s been on the short list of multiple head coaching searches, could be a coach that teams want to talk about,” Tannenbaum said on Monday morning. “This would be the perfect storm and here’s why. He’s immensely popular in that area of the country and if he can go with Trevor Lawrence right down the road to Jacksonville, with all those picks and cap room, that’s the ideal situation. I know from talking to a number of NFL general managers, they see Dabo in the same mold as Pete Carroll. A high energy guy. Pete Carroll has been a coach in the college and the pros. If Dabo Swinney was going to do it, and that’s a big if, this would be the perfect situation… If Swinney would ever go, this would be the perfect storm to do it with, following this season.”

However, given the success he’s had at Clemson, along with his loyalty to the school and community, it’s hard to imagine Swinney leaving to chase more money and a very different challenge. After all, this is a coach who only allows his players to say three swear words, so he sort of has total control over the entire operation — and he runs in to near perfection.

Still, given the rumors, longtime ESPN football analyst and broadcast Kirk Herbstreit, whose twin sons currently play under Dabo at Clemson, offered his take on the head coach possibly leaving for the NFL. In Herbie’s eyes, there’s no way it’s happening, and he offered up one very simple reason why while discussing the topic with Dan Patrick.

Two words: “power and control,” which just doesn’t come with being a head coach in the NFL. For Dabo Swinney, he’s got both at Clemson, and he doesn’t use them to bully players or motivate them through yelling at them, but rather by building a family atmosphere that works in college football much better than in pro football.

While Kirk Herbstreit does say he doesn’t want to use the word “never” when describing the future of Swinney, the fact that even he would be shocked if he ever left is pretty telling. So for all those people who think Dabo’s the next hot commodity in the NFL coaching carousel, Herbstreit lays it out pretty simply why it probably won’t happen anytime soon. Sorry, Jags fans, onto the next one.