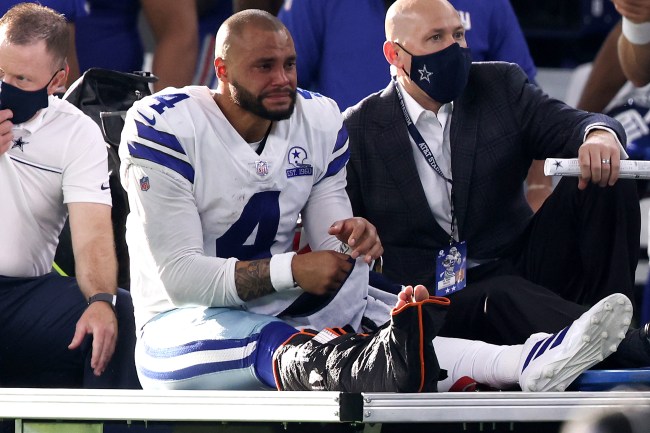 Following the Dak Prescott injury that shocked the NFL world this past Sunday, the Dallas Cowboys’ season just got a helluva lot more difficult. It was already pretty pathetic given their 2-3 record — which came with one of the top quarterbacks in the league — so now it just seems like the team’s doomed and will miss the playoffs. Of course, the NFC East is garbage, so, who knows, maybe Dallas sneaks in with a 6-10 record or something.

Given the reality of Dallas’ short-term future for the rest of the season, it’s understandable that plenty of Cowboys fans are frustrated and are just looking for anywhere to vent. Well, looky here, there’s something called the Internet, which pretty much gives people free rein to act like a complete fool to voice their opinions and become keyboard warriors thanks to the safety of their computer and/or phone screens.

Well, some Cowboys fans weren’t holding back in voicing their anger after the Dak Prescott injury, looking for anyone to blame now that the star quarterback’s out for the foreseeable future. One of the victims of such anger? A retired NFL running back named Rashad Jennings, who used to play for the Giants and, by sheer coincidence, wore the same number (No. 23) as current Giant Logan Ryan, who made the tackle that injured Prescott.

Yep, Jennings, who hasn’t played since 2016, is getting confused for Ryan because they shared the same jersey number. Pathetic. Just take a look at some of the threatening messages the retired player received on Instagram from a few dummy Cowboys fans. 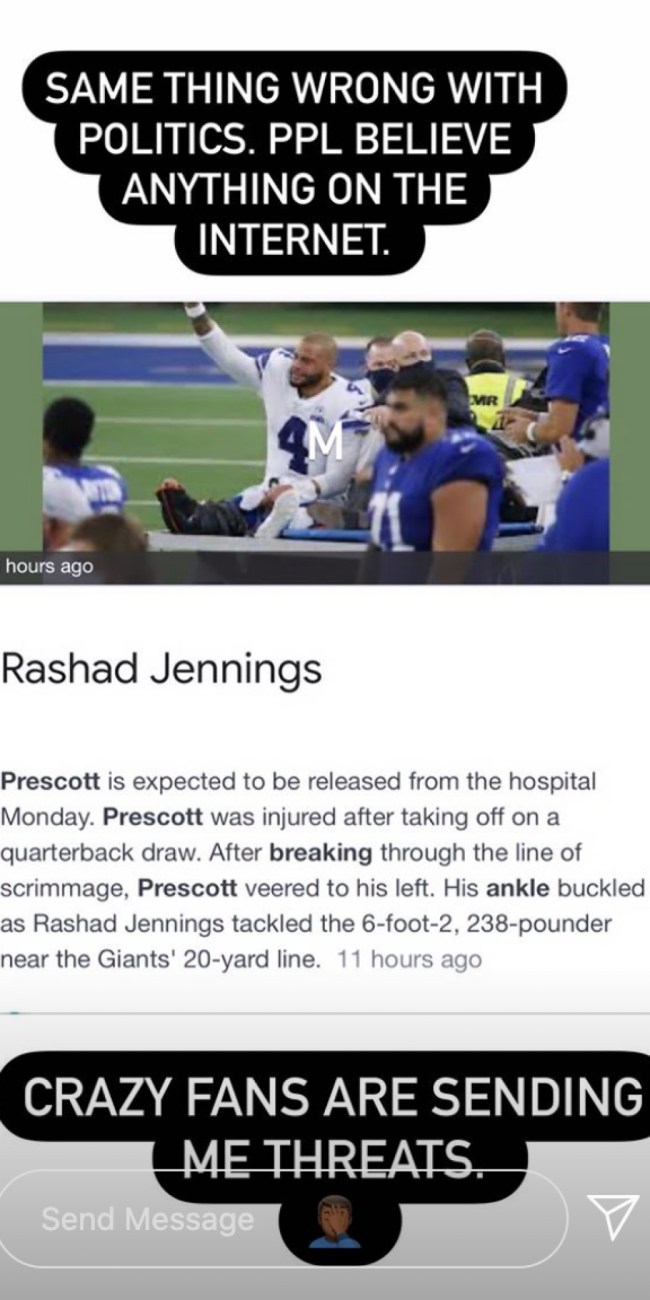 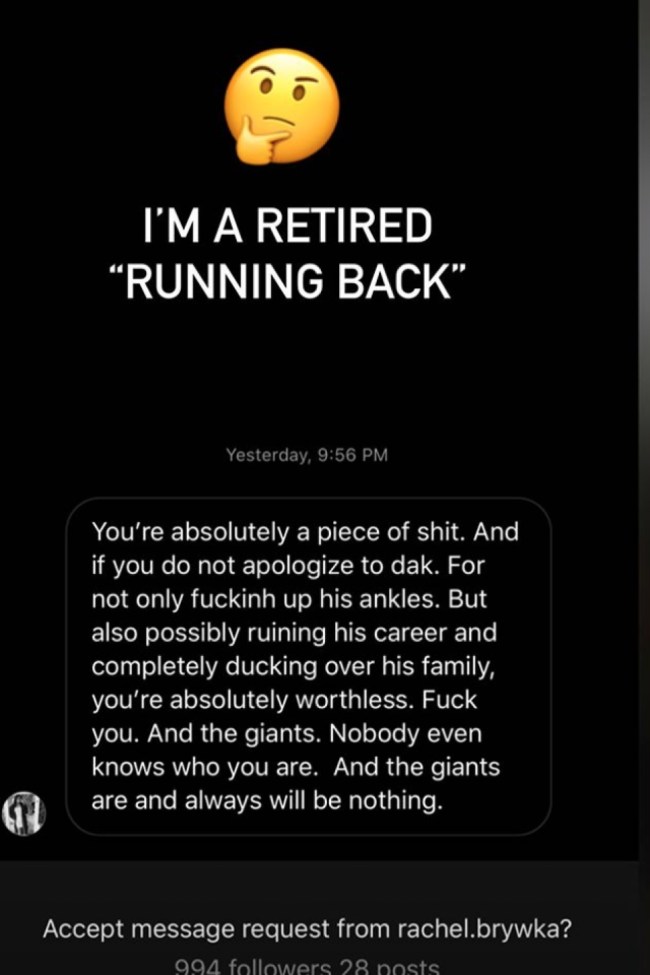 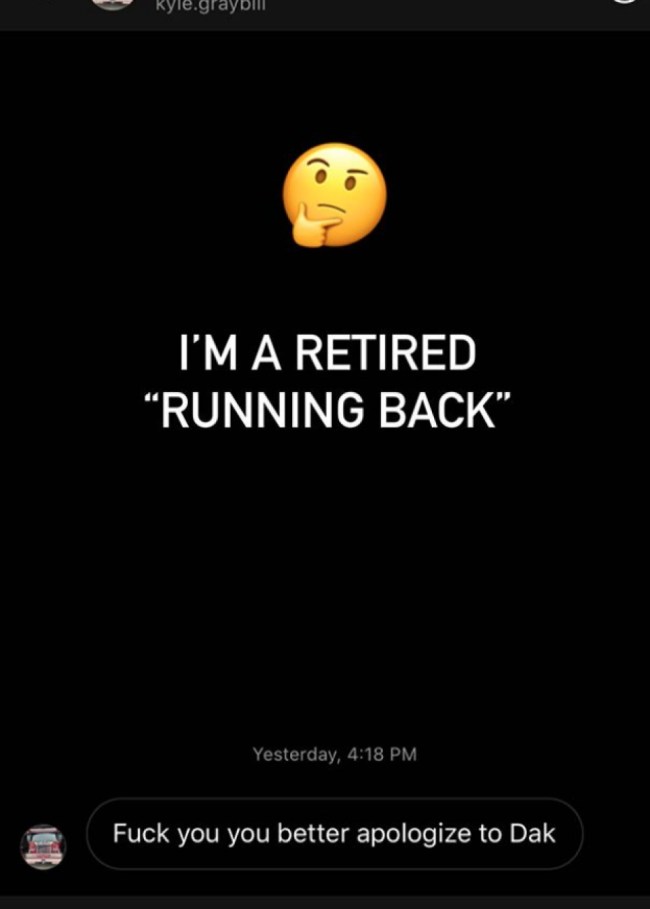 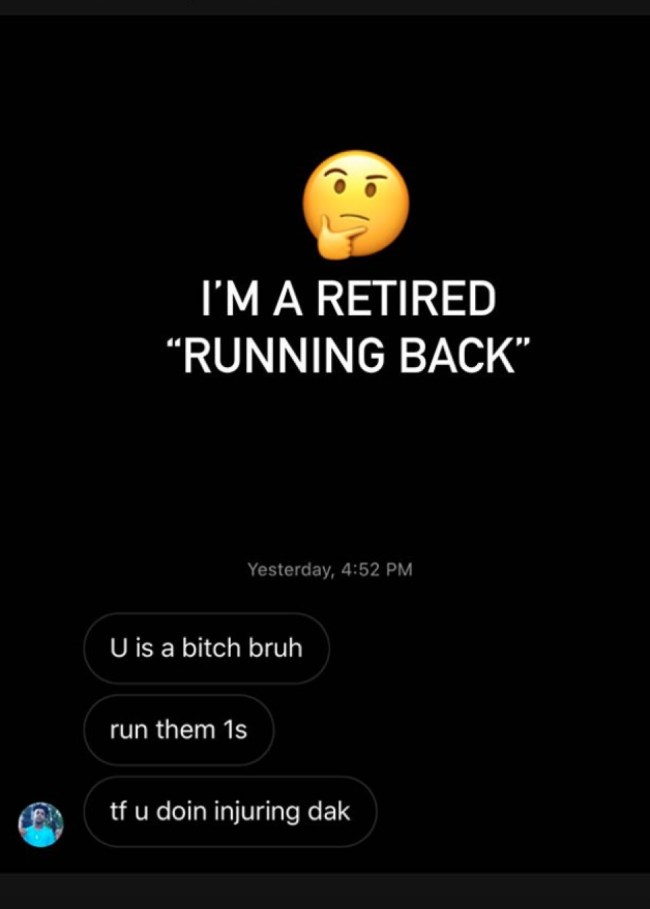 Instead of blasting the insane Cowboys fans who were coming at him, other than putting the messages on his Instagram story, Jennings simply posted a message sending good vibes to Dak Prescott, simply saying he wishes any athlete in any sport well wishes. 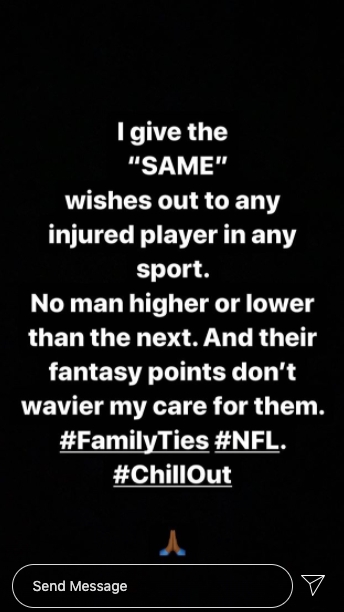 It’s pretty ironic that the same Dallas fans who are blaming and threatening Rashad Jennings online for the Dak Prescott injury aren’t wise enough to pause, take a deep breath and, you know, USE THE FUCKING INTERNET to find out that the guy hasn’t played in the league in four years. Once again, pathetic.

The Internet can be a terrible place, and people like these Dallas fans who attack somebody for literally doing nothing but sharing a number with another player need a reality check. Plus, in defense of Logan Ryan, the guy made a routine tackle on Prescott anyway, so there’s really nobody at all to blame for the unfortunate injury the quarterback sustained. It’s sports, bad things like this happen sometimes.