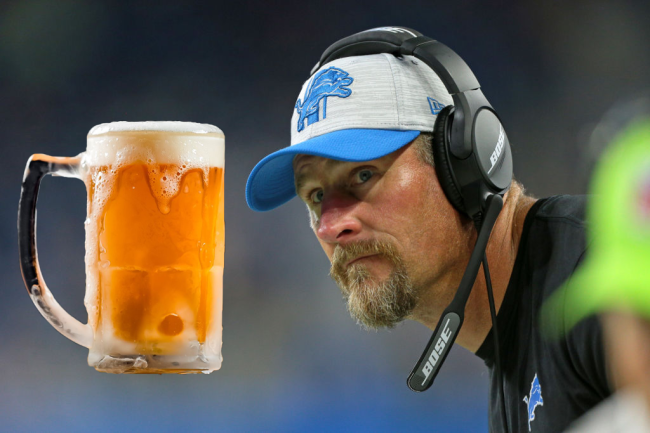 Campbell, 45, played tight end at Texas A&M from 1995 to 1999. He stands 6-foot-5, 265 pounds and played 10 years in the NFL. While much of his professional career on the field was hindered by injuries, it is his persona on the sidelines and in the locker room that has garnered him quite the reputation.

He absolutely dominated his introductory press conference in Detroit, shared that he drinks more caffeine than a regular person can handle, called himself an asshole for cutting a player on his birthday, and said he’s excited by the lack of turds on his roster. All of those things happened in just the last eight months.

However, his legend extends beyond his time in the NFL world. According to The Athletic’s profile, Campbell was a party animal at Texas A&M who just wanted to drink beers with the boys until the break of dawn.

When his friends were getting ready to leave early in the morning, Campbell would ask them where they were going with so little time left until sunrise. His teammates loved him so much that they would feel bad for letting him down and stuck around to put back beers.

The legend of Party Dan, from The Athletic:

Liucci: (If we had a party at the house) the deal was: “We’re having a party tonight, and nobody’s going to bed until the sun comes up.” Dan was real big on that. “Hey, you gonna let your boys down and go to bed right now? Only two more hours till the sun’s up, I thought that’s what we were gonna do?!”

And you’re dying, but you’re like, “Hey, I guess you’re right, Dan …” You can’t be the one who bails on him. There’s a dozen of us up there, sitting outside having 6 a.m. beers. We’re looking around like, “Oh my god, what are we doing here?”

Lechler: There were plenty of nights where we’d be having a get-together and I would see that look in his eye and just be like, “Oh no.” And, sure enough, (a) little time would go by and here comes Dan: “Hey, Lech, we’re staying up till the sun comes up tonight.” And you’re just … “oh, shit, no.” But you did it for Dan. … When we beat Kansas State in the Big 12 championship, I knew the second that plane landed at home what was gonna happen. Think that one went for about two days.

Everything about this is amazing. Campbell wanted to party until the sun rose above the horizon and when his teammates wanted to leave, they felt guilty letting their massive tight end who can probably drink a million beers to drink by himself.

And it happened every single time. Just imagine what that Big 12 championship party looked like… 48 hours straight of Dan Campbell housing beers.