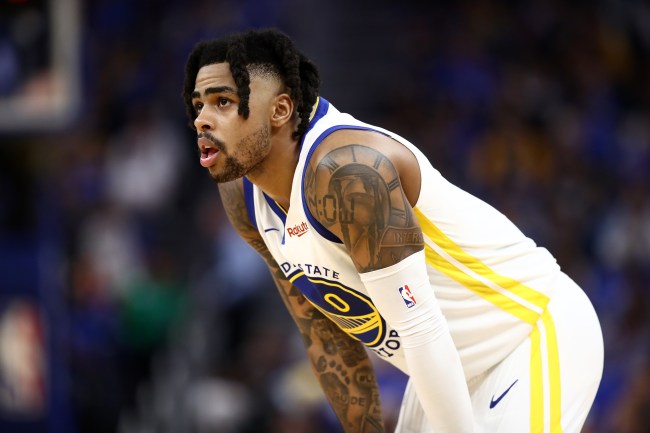 D’Angelo Russell is still just 23 years old and made the Eastern Conference All-Star team last season as a member of the Brooklyn Nets, so it’s pretty strange to see this guy bounce around so much in his (still young) NBA career. A former No. 2 overall pick, Russell seems to represent a new generation of NBA player — flashy, exciting, offensively talented, frustrating at times, and lacking the leadership or defensive awareness to become a bonafide superstar.

I don’t want to knock D’Angelo Russell, because, as mentioned, he’s still young and can figure it out, but, man, how many more times will he need to be traded before he does? The latest blockbuster deal involving the smooth lefty came during this year’s NBA Trade Deadline, when the Golden State Warriors decided they’d cut their losses and move Russell to the Minnesota Timberwolves for former No. 1 overall pick Andrew Wiggins. It’s a questionable trade for a few reasons.

First, it seems like Russell and Wiggins are mirror images of one another, with both displaying similar skillsets. They both came in with lots of pedigree and hype, and have yet to prove themselves as anything more than volume scorers are decent-to-bad teams.

Second, and here’s where things get really interesting, the Warriors were willing to absorb one of the worst contracts in the NBA by acquiring Wiggins, who inked a five-year, $148 million extension that kicked in last year, meaning the guard’s making a cool $27.5 million this season for averaging an inflated 22.4 points on 44.4% shooting.

It’s that second part that’s really intriguing, because the blatant question here is why the Warriors were open to adding such a massive contract, right? Well, we might have some insight there, because, according to The Athletic’s Marcus Thompson II, Golden State quickly realized that D’Angelo Russell was such a bad fit that they pretty much did anything to get rid of him.

“Take that as an indictment on Russell, if you want. It doesn’t seem like he did much to instill confidence. He didn’t play defense and disappeared when off the ball. He didn’t instill confidence in the leaders of the franchise that he would figure it out. But it should also be seen as a failure by the Warriors.”

“They championed him. They said they wanted him as part of their core. And before they even got to see him with their core, they walked away. Which means, at minimum, they completely miscalculated Russell’s fit. It’s early, and you never know how these things turn out. But the Russell experiment must have gone so poorly that the Warriors look like they might have been the ones to blink first in a negotiation with Minnesota.”

Damn, if true, that’s pretty harsh — and quite the honest move from the Warriors’ front office. Not many executives would admit to being so wrong so soon after acquiring a player just a few months ago, so kudos to Golden State’s leadership for recognizing that D’Angelo Russell was a bad fit early. Remember, these are the same people who allegedly supported the guard after getting him in a sign-and-trade deal for Kevin Durant, so it’s not as if they weren’t hopeful it’d work.

In addition to the aforementioned report from The Athletic, it was suggested that other superstars on the Warriors just weren’t buying into Russell as a long-term solution, which may have prompted the team to move him sooner than they may have otherwise. Here’s what Thompson III added in his piece.

“Voices that matter in the locker room soured on Russell as a long-term fit rather quickly. He wasn’t a disruptive personality, just not a beneficial component to a winning defense or a correct fit positionally, considering the two soon-to-return star guards are franchise pillars. Russell didn’t work, but that doesn’t yet mean it didn’t work.”

Now the attention turns to Wiggins, who has an opportunity to reestablish himself as one of the top young players in the game; and can get some confidence in this lost season with the Warriors. Pairing the former No. 1 pick with already established superstars like Stephen Curry, Klay Thompson and Draymond Green next season — along with, potentially, a top-3 pick in the 2020 NBA Draft — has the possibility to be lethal, so it’s on the streaky (and moody) Wiggins to fulfill his potential now.

It’s a fresh start for both Wiggins and D’Angelo Russell, but it’s incredible that it’s even gotten to this point given the acclaim both entered the league with just a few years ago. Here’s to hoping they both find long-term homes and become the stars so many believe they can be — because they’re both loaded with talent.