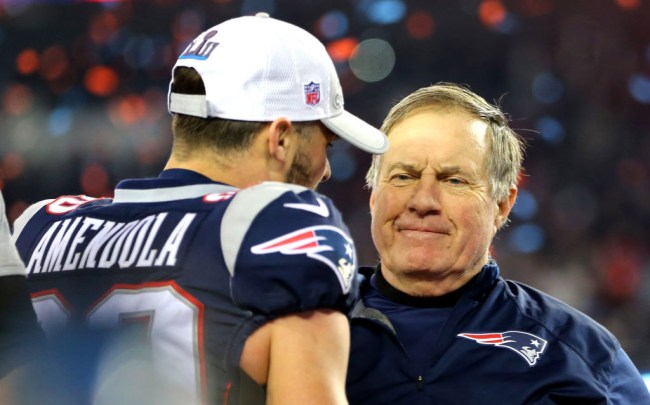 While we were all trying get over Danny Amendola’s breakup with Miss Universe 2012 Olivia Culpo, he was busy getting on with his life and that included not taking another pay cut to stay with the New England Patriots.

Instead of going for Super Bowl ring number three with the Pats, Amendola signed a two-year, $12 million deal with the Patriots’ division rival Miami Dolphins.

Amendola spoke with ESPN’s Mike Riess about why he made the decision to leave New England for Miami, rather than take his fourth pay in as many years cut to stay.

“When free agency broke, I came to the realization that he [Belichick] wasn’t going to really come close to any of the other offers I had,” Amendola told ESPN. “I had to make a decision for my family and go down to Miami and continue my career there.”

Amendola also probably won’t miss playing for Belichick, who he has called the “best coach to ever coach the game.”

“It’s not easy, that’s for sure. He’s an a–h— sometimes. There were a lot of things I didn’t like about playing for him, but I must say, the things I didn’t like were all in regards to getting the team better, and I respected him,” he said. “I didn’t like practicing in the snow, I didn’t like practicing in the rain, but that was going to make us a better football team and that was going to make me a better football player. It wasn’t easy, and he’d be the first to admit, at the [Super Bowl] ring ceremony, that it wasn’t easy playing for him. The silver lining was that we were at the ring ceremony.”

He also shared some insight on how he and the other Patriots players felt about Malcolm Butler’s inexplicable benching in Super Bowl LII.

“I have my thoughts about it because I was out there putting my blood, sweat and tears out on the field that night, and one of our best players wasn’t on the field,” he said. “To tell you the truth, I don’t know why. I did ask, but I didn’t get any answers. I can’t make decisions like that, so I don’t necessarily worry about it, but I know Malcolm is a great player and he could have helped us win. For whatever reason, he wasn’t out there. He’s going to play more football in his career, and he’s going to be a great player for a long time.”

Asked if he sensed the Butler decision hurt his Patriots teammates, Amendola said, “Yeah, I did, honestly. Nobody really got an explanation for it. He’s a brother of ours. He was a brother of ours that year. And I hate to see a guy who worked so hard throughout the season not get a chance to play in the biggest game of the year and really get no explanation for it. With that said, I don’t know how the business aspect went into that decision. I don’t know how the personal aspect went into that decision between him and Bill. But as a friend, I would have loved to see him on the field that day.”

Months later and still not even Patriots players have any idea why Butler was benched. No wonder things have gotten to the point in New England where a guy like Rob Gronkowski is not planning to attend the start of the Patriots’ offseason program and is looking to get paid commensurate with what he brings to the team.

Gronkowski still is considering whether to play the upcoming 2018 season, and has had “good communication” with the Patriots, per source.

Then again, it wouldn’t be the New England Patriots if there wasn’t some kind of drama surrounding them.