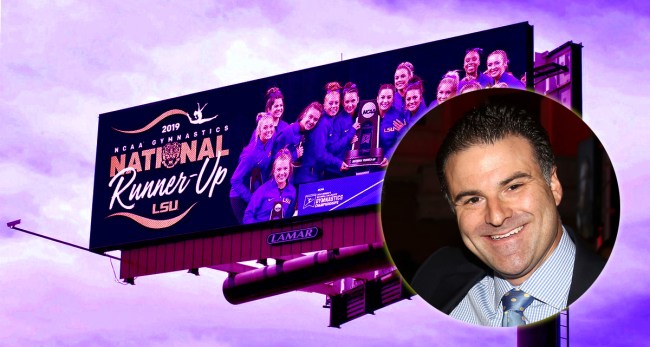 LSU’s women’s gymnastics team finished in second place behind the Oklahoma Sooners at the NCAA Gymnastics Championships on Saturday night. The team posted its second-best-ever score in a national final, so all in all the Tigers had themselves one heck of a good season.

As such, the university wanted to congratulate the women on their tremendous success in 2019 with an electronic billboard message expressing its appreciation for their accomplishment.

In and of itself, this isn’t really much a story. That is, until noted internet troll, former ESPN reporter Darren Rovell, decided to chime in on Twitter with another one of his patented horrible takes.

No, you can’t put up a billboard for coming in second. https://t.co/wxDPqBNzNr

“No, you can’t put up a billboard for coming in second,” Rovell wrote on Twitter.

Then when people on Twitter took issue with Rovell’s stupid complaint he decided to double down by saying, “It’s a societal problem.”

I’m not doubling down. I’m asserting my original position.

Not doubling down. My opinion never changed.

So finishing second in the entire nation and getting a billboard congratulating someone for it is the same as a participation trophy? Wow. This is bad even by Darren Rovell standards.

Naturally, because it’s what he does, Rovell ended up getting ratio’d for his poor tweet and even heard from members of the LSU gymnastics team.

Sounds like someone was runner up in their Easter egg hunt. There’s always next year, Dave. https://t.co/QfVqsvkIv2

You want a billboard for that Darrel? https://t.co/kI2glteRqf

Others also made some very salient points which, of course, Rovell completely dismissed.

Apples and oranges. Not close.

You can’t be this dense. Final Four billboards and signage go up as soon as they make it. This went up after they lost.

Of course this tweet is when he stopped responding, haha. #SoftAssRovell

Come on, @darrenrovell You engaged, so at least see this debate out. Explain it, or eat crow.

They are in the arena. Not advertising it to the community. Huge difference.

The guy saying second-best-in-the-nation LSU doesn’t deserve a billboard? He placed 21,463rd in a marathon and got the shoes he ran it in plated in gold. https://t.co/QFiZ0gJDRw

And then there were just the replies calling him an idiot.

Quite unsure who anointed you the societal billboard police. It costs $0 to stay in your lane.

No, you nerd, you screenshotted it and put it on Twitter, though.

Can you point out on the doll where the big scary billboard hurt you?