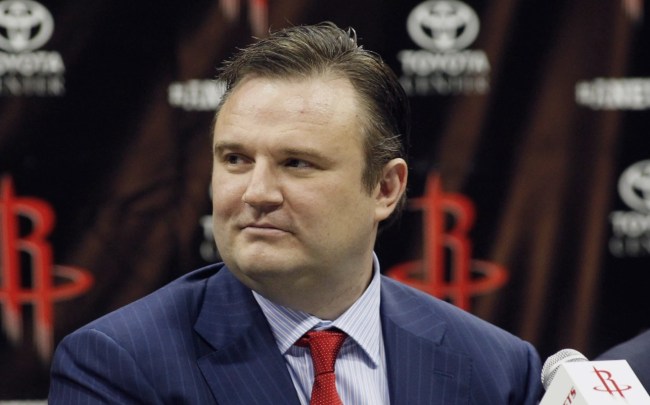 Just over a year ago, Rockets’ general manager Daryl Morey was the talk of the NBA after tweeting his support of pro-democracy protesters in Hong Kong with a graphic that read “Fight for Freedom. Stand with Hong Kong.” That tweet sparked a massive conversation and immediately put the NBA and its relationship with China into the spotlight. The Chinese government even told NBA commissioner Adam Silver that they should fire Morey for his tweet.

Fast-forward to this week and Morey has stepped down as Houston’s general manager. Morey expressed in a statement that he decided to leave the organization after discussing “thoughts with friends and family.” During an interview with the New York Times, he was asked whether or not his tweet and the fallout thereafter had anything to do with his decision, but reportedly left the interview after the question was asked.

While we may never know why Morey ultimately decided to step down, China has made its opinion about his resignation clear.

A broadcaster for CCTV sports, a state-backed television station in China, spoke about Morey’s departure on Friday morning. While the broadcaster did wish Morey well, the phrases that followed were of a different tone.

“We have learned of Morey’s resignation and will not comment on this,” the anchor said on Friday, according to Yahoo. “[But] we hereby reiterate that any attempts to hurt the feelings of Chinese people would have to pay the price.”

China very literally told the NBA to shut up and dribble when it was hosting preseason games in the country after Morey’s tweet, and LeBron James and the league obliged. On top of blacking out NBA games, the Chinese government canceled all press conferences giving players zero opportunity to speak up if they wanted to plus it took down NBA signage featuring Kyrie Irving and James.

James actually did speak about the Morey tweet. Prior to the Chinese government shutting things down, he said that Morey was ‘uneducated’ about the situation and only thinking about himself. James’ comments made no sense seeing as how Morey was very clearly thinking about others and not himself, but the face of the NBA had a check to collect.

The conversation regarding the NBA and China hasn’t cooled off since then, either.

A few months ago ESPN published a bombshell report about abusive behavior in NBA academies around the country. Several American coaches came forward to say that Chinese coaches at certain camps were “physically abusing young players and failing to provide schooling.”

One former league employee even compared the atmosphere when he worked in Xinjiang to “World War II Germany.” Another American coach who worked for the NBA in China described the project as a “sweat camp for athletes.”

The NBA hasn’t pushed back on China in any way. With that in mind, don’t be surprised if the league keeps its stance of being completely silent on the matter following these statements about Morey.