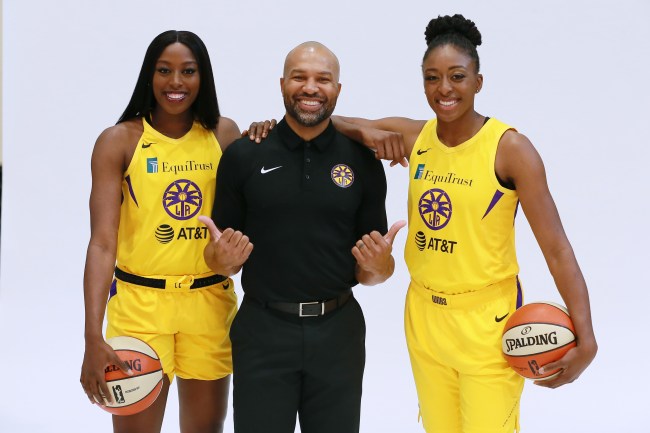 Derek Fisher flew on cushy planes, stayed in the most lavish hotels, banged his former teammate’s wife, and got paid a king’s ransom during his 18-year NBA career.

Now the first-year head coach of the Los Angeles Sparks, the 44-year-old has been hit with the harsh reality of life as a member of a WNBA organization.

Coming off a win against the Minnesota Lynx, the five-time NBA champion snapped a photo of his team waiting for a train at the Minneapolis-St. Paul International Airport carrying their own heavy bags.

So after a hard fought win on national television @la_sparks are right back to reality that these women are not being treated like the best athletes in the world!! #facts #hastochange #comeonnow

“So after a hard fought win on national television @la_sparks are right back to reality that these women are not being treated like the best athletes in the world!! #facts #hastochange #comeonnow.”

Meanwhile, Nike teamed up with the Seattle-based design firm Teague in 2014 to conceptualize how planes for NBA teams in the future could be nothing less than flying in a moving training facility.

What do you get when Nike team up with design consultants, Teague? A luxury Jet specific for traveling sports teams. pic.twitter.com/bfIoaxPXTp

NBA teams use charter jets or private planes for travel at the moment, which is not only more comfortable than commercial but it frees teams from being at the mercy of airline schedules. A spokesman for the Sparks told NBC News on Sunday that all WNBA teams fly commercial, which explains why the Las Vegas Aces had to forfeit a game against Washington after traveling for 26 hours and not arriving in Washington until just a couple hours before tipoff. WNBA teams also take red-eye cross-country flights when there are better options available to save on cost.

Of course this makes sense strictly from an economical standpoint, as the WNBA isn’t exactly appointment television and it continues to hemorrhage money. The league lost $12 million in 2017, and Adam Silver claims that the league loses $10 million a year every year of operation. Not a good sign for the longest running professional women’s sports league.

The average base salary for a WNBA player is about $75,000 a season and the max is $117, 500, according to the Indianapolis Star, which is seven times less than the NBA’s league minimum. This forces many players to play oversees once the WNBA season is over, as many European leagues pay over $100,000. Good for the money, not great for the body, as players who go this route have little-to-no offseason and are at higher risk of injury.

Fisher’s comment comes in the middle of CBA negotiations between the league and its players.