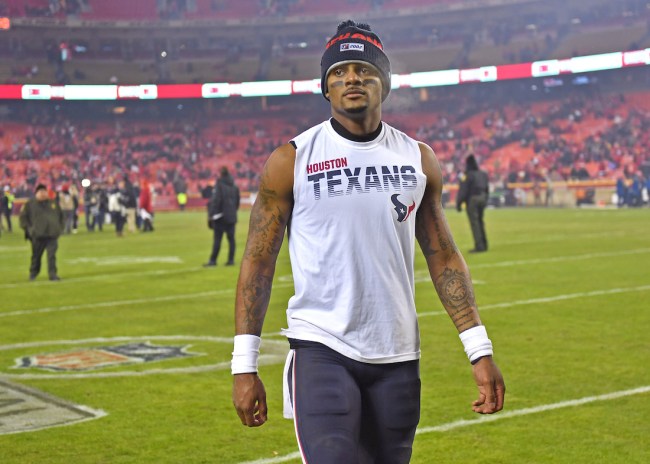 It’s difficult to keep up with all the different Deshaun Watson allegations that have surfaced over the past few weeks, with more and more women filing reports against the Houston Texans quarterback for allegedly being inappropriate with them. While nobody knows for sure what’s to come with it all — and the NFL does its due diligence by investigating things itself — it’s an unfortunate situation for everyone involved.

There have been some reports that the Watson allegations are nothing more than a distraction, with the attorney for the Texans’ Pro Bowler describing an alleged blackmailing situation a few months ago. Others think this may be a way for the Houston Texans to regain leverage in the trade demands the quarterback had this offseason, hoping other teams will be scared off from making a deal.

Regardless of the result of these Deshaun Watson allegations, one former Texans player, Charles James, thinks the “damage is done” in regards to the quarterback’s reputation — no matter if he’s found innocent or not.

Taking to Twitter, James gave his thoughts on the situation, and says that, even if Watson is found to have done nothing wrong, at this point, it’s hard to put the genie back in the bottle and that the court of public opinion will always look at him as being guilty.

“Deshaun Watson can be proven innocent and people will still say he did it. They’ll say shit like ‘he probably paid them off’ you know why because once you throw allegations out there like that the damage is done and they automatically assume you guilty. Shit sad.”

Even if you’re the most hopeful and optimistic person on the planet, sadly, Charles James is probably right in his claim. Unfortunately, we live in a world where people can say whatever they want to on social media or as hecklers from the stands without much repercussion, so there will always be those jackasses who have convinced themselves that Watson’s guilty and is a bad guy. That’s just the sad part of human nature, sometimes.

As more and more Deshaun Watson allegations filter in, and more information is detailed, we’ll get closer to an understanding of what’s going on. If the Houston Texans quarterback is, in fact, guilty, he should be punished accordingly. But if he ends up being found innocent, here’s to hoping his name, image and reputation isn’t stained forever.