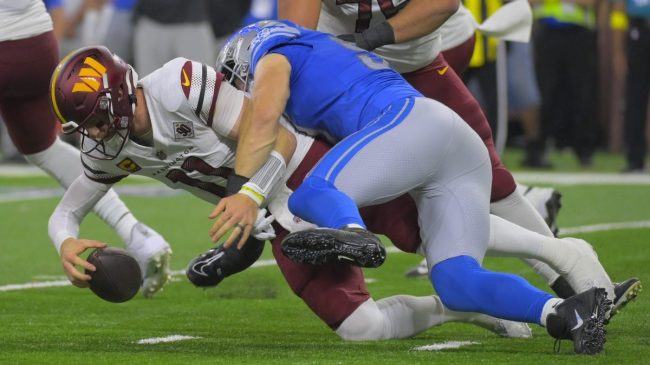 Aidan Hutchinson officially announced himself to the NFL world on Sunday. The No. 2 overall pick in the 2022 NFL Draft was dominant against the Washington Commanders, racking up three sacks to help seal a 36-27 victory.

The Michigan Wolverines product has quickly made a name for himself in Detroit not just with his play, but with his attitude and charisma off the field as well.

Now it appears Lions fans will have one more reason to cheer for the rookie.

Hutchinson’s three sacks against the Commanders were a Lions franchise record for a rookie. But it turns out he couldn’t have done it without a bit of help.

“This game is dedicated to Hudson, who is a kid who just got diagnosed with leukemia,” Hutchinson said after the game. “He’s a big Lions fan, he’s from my area. I sent him a video before the game. He was cheering me on. I’m just happy to have good games to spread causes to kids like that. Just raise a lot of awareness for things like that.”

Woodyard reports that Gaszi was diagnosed on Sept. 7 after first visiting the doctor 10 days prior following a sprained ankle.

“They pretty much said Hudson spraining his ankle pretty much saved his life because otherwise we might not have known,” Emily Gazsi told ESPN. “We’ve caught it really early and he has a really good prognosis. It’s a long recovery, it’s like 2-3 years with treatment, and he’s 5, so it’s been really tough trying to get him to take his meds — and he has a port in his chest now that he has to deal with. He did name the port Jimmy so we’re gonna navigate Jimmy, but we’ve got so much love and support that it’s been kind of overwhelming … we’re so grateful and thankful.”

Hutchinson also filmed a video for Gazsi prior to the game wishing him well in his recovery.

“Just keep pushing through and keep hanging in there,” Hutchinson told Gazsi in the video. “I know you’re kind of going through it right now, but hopefully you find a little motivation in watching our game on Sunday and keep rooting for me and put on the little eye black in support of me and I’m gonna have you on my wrist on my game tape in a couple hours so it’s gonna be a really good time and I can’t wait to meet you, man. Go Lions.”

Aidan Hutchinson may well be a great football player, but it turns out he’s a pretty great guy as well.