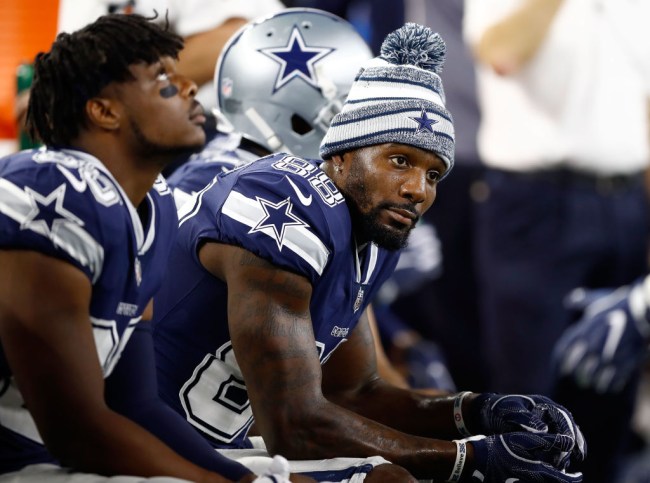 The Dallas Cowboys are Dallas Cowboy-ing once again. When in doubt, point fingers. After the Cowboys’ 19-16 overtime loss to the Texans (thanks, Jason Garrett!), supposed “no. 1” receiver Allen Hurns offered thinly-veiled criticism of Dak Prescott by essentially saying that the receivers were getting open, just not getting the ball. Through five games, Hurns has just 8 receptions for 84 yards and one touchdown. Not great.

After the game, Cowboys owner and certified old person Jerry Jones took a shot at the Cowboys receiving corp by telling 105.3 The Fan radio “I’d love to have No. 1 receivers.”

Nobody is loving the Cowboys receiving troubles more than Dez Bryant. The 29-year-old receiver, who is still looking for a team after being waived by Dallas over the summer, responded to Jones’ comment on Twitter.

The saga continued on Tuesday when Jones doubled down on his comment, while baking in an obvious shot at Dez.

“First of all, a true No. 1 you saw one the other night,” Jones said. “You see [Atlanta’s] Julio Jones, you see players like that. In my mind, every team doesn’t have a true No. 1 receiver. When you put it in that class, those guys that just absolutely change the ball game with where they are. And that hasn’t been our case for several years here that we’ve had a true No. 1, not a true No. 1.”

As a receiver playing for the Dallas Cowboys your mind have to be right because you will never see targets like Ab Obj d hop none of those guys..I was never schemed into things I made things happened through out my career I’m mr 73.. they had J Witten as our #1 so Jerry is right

“Mr. 73” is referring to the number of touchdowns Dez has scored in his eight year NFL career. In 2017, Dez finished the season with 69 receptions for 838 yards and 16 touchdowns.

We’ll keep you posted as to how this unfolds. Neither of these buffoons can keep their mouths shut.