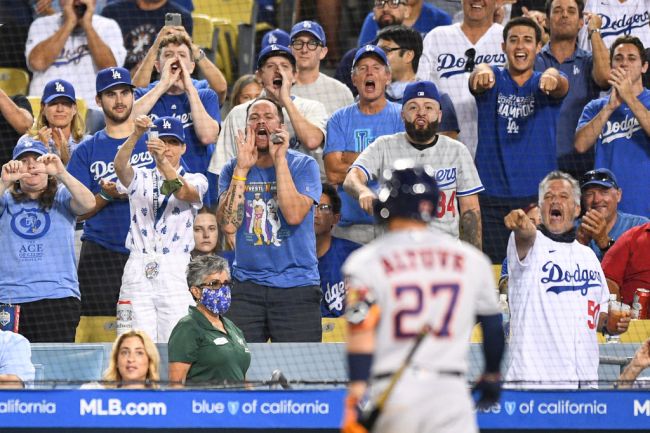 The Astros and the Dodgers hate each other and it’s no secret. After a year without fans, when the two teams got together for the first time, it was utter madness in the stands.

Fights broke out across the stadium and punches, food and drinks were flying.

The projectiles were targeted directly at Astros fans and they got pretty intense.

I witnessed the whole thing. It was bad. pic.twitter.com/t1oeHG8ZR8

As a reminder, the beef dates back to 2017. The two teams met in the World Series that year and Houston was the victor in a seven-game, highly-contested series.

Not long thereafter, details began to emerge about a cheating scandal within the champion’s organization. The Astros were found guilty of using technology to steal the signs of opposing teams during the 2017 and 2018 seasons.

They were caught cheating and the 2017 World Series title will forever have an asterisk.

To summarize the entire thing, Houston would place a camera in centerfield that focused only on the catcher. The catcher, calling pitches, would signal what was coming next, and a person manning the camera will call it in.

Whoever was on the other end of the call would then signal the pitch to the batter by banging a trash can. One bang indicated a fastball, two indicated an off-speed pitch.

The Astros hitters knew, at least at home, what pitch was coming.

Convictions were handed out prior to last season and both general manager Jeff Luhnow and field manager A.J. Hinch were suspended for the entire year. Players (wrongfully) were not punished by Major League Baseball after being granted immunity for their cooperation.

As a result, the 2020 season was going to be ruthless. Opposing fans were going to greet the Astros with the opposite of open arms.

However, because of the COVID-19 global pandemic, fans were not allowed in the stands for the first year since the Astros conviction. It was a free pass.

With the fans back in the stands, 2021 has not been as bad it could have been, but it has not been uneventful. Trash cans have been thrown onto the field, fans chant “you’re a cheater,” security guards got in on the trolling and boos are abound.

The Astros, who are the softest team in the league, even complained to the MLB about being bullied.

Going back to Cali.

In the grand scheme of the entire scandal and its fallout, Tuesday night was a big deal. Houston traveled back to play the Dodgers in Los Angeles in front of fans for the first time since details of the sign-stealing scheme were revealed.

Fans lined up in the parking lot to “greet” the Astros bus at Dodger Stadium last year, but that doesn’t count.

With the blood still boiling between the two sides, fans poured in from all over the country to attend the return. One Dodgers fan even drove to Los Angeles from GEORGIA to greet the Astros team bus with an asterisk sign.

Once the game got underway, so did the brawls. Security had to intervene all over the stadium and even got a few punches in themselves.

Went to my first dodger game for my bday against the Astros…aye I love it here 2 fights broke out got beer thrown at every angle 🤣🤞🏻I wanna b a dodger fan now n b one of y’all pic.twitter.com/1rPdwrxz1A

Looking at the crowd, I’m sure a fight broke out…classic #Dodgers #Astro pic.twitter.com/TbBuT5uXjl

Dodger fans starting fights with each other now 😂 They must be losing. pic.twitter.com/X3GFoR2GKM

The two teams play again on Wednesday night and there are sure to be as many, if not more, fights in the stands.