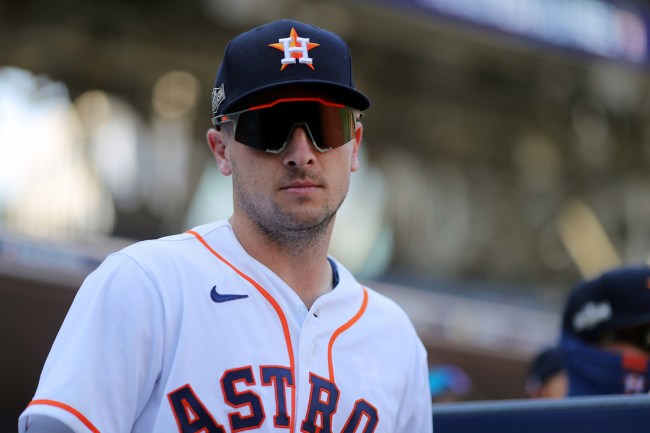 Not sure about you, but I personally feel like Alex Bregman and his Houston Astros teammates got off easy last MLB season after that whole cheating scandal broke. Like, without any fans allowed in stadiums because of the pandemic, the former *World Series champs didn’t have as many people heckling them nonstop — as they should have given the crime they committed during the postseason a few years ago.

But because people don’t forget, a Miami Marlins security guard took matters into his own hands during a Spring Training game against the Astros, trolling Alex Bregman by banging on a trash can during one of his at-bats, which, eventually, led to a strikeout. This is brilliant, and every baseball fan needs to follow this guy’s energy anytime the Astros come to town against their hometown team.

What a time to be alive. A member of the ballpark security team at Roger Dean Stadium — wearing an official polo with SECURITY in big letters on the back — just spent Alex Bregman's entire plate appearance banging a trash can before every pitch. Bregman struck out looking.

Yes sir. Here is that exact AB on video from our seats. pic.twitter.com/SBxjDBkPv1

The fact that this wasn’t just some fan makes the story so much better. Like, this security guard — who, per the tweet above, was wearing an official polo declaring his position at the stadium — risked his job all in the name of trolling. That’s not only commitment, but it’s a whole new level of hatred for the Astros’ cheating to advance in the postseason years ago. This man deserves an award.

As one would expect, plenty of people on Twitter loved seeing the move from the Marlins’ security guard.

I don’t know which is better – Trolling the Astro’s or trolling their fans who can’t believe that the rest of the MLB aren’t going to forget about these cheaters for many, many seasons to come.

No, he is doing all of our jobs.

Love it. Have fun playing in front of fans this season, cheaters.

The *astros deserve this for the rest of their existence

Feels like someone who should be given a raise

With Spring Training nearing an end, and a limited amount of fans allowed in MLB stadiums this year, both Alex Bregman and the Houston Astros should expect more of this kind of treatment. Sure, the team’s GM and former manager received some punishment for their parts in the cheating, but the players didn’t get stripped of their championship rings or really experience a whole lot of hate from fans last season. Something tells me that’s about to change this year — and it’s only going to get worse as the season moves along.