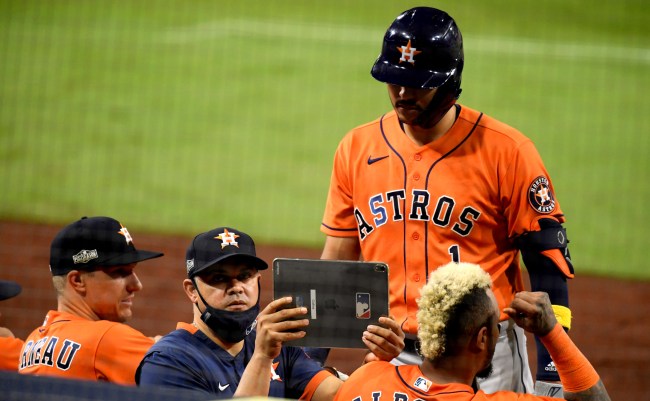 The bizarre 2020 Major League Baseball season may finally be over with the Los Angeles Dodgers winning the World Series, but there was still no shortage of baseball fans dressed up in some very clever Halloween costumes mocking the Houston Astros for their cheating scandal.

That’s probably because the Astros lucked out with almost no fans being allowed to attend their games during the 2020 Major League Baseball season. Had this been a normal baseball season, Houston players like Alex Bregman, Jose Altuve, Carlos Correa and others who skated with absolutely zero punishment for cheating their way to the 2017 World Series championship would have been taunted, mocked and booed mercilessly all summer anytime they played a game on the road.

Related: Baseball Hero Joe Kelly Visited A Giant Mural Of Him Clowning The Astros And It Was Awesome

So, with a license to dress up as pretty much whatever they wanted to be on Halloween, many baseball fans decided to take advantage of one more opportunity to express their displeasure with the Astros, spineless MLB commissioner Rob Manfred, and the sign-stealing scandal that rocked the league before the pandemic hit.

The Astros are officially the halloween costume of the year

In 2017 and 2018 the Houston Astros cheated & won the 2017 World Series* using a system of hidden cameras to steal signs and banging a trash can to signal pitches to the batter. Astro management was punished, but the players were not. These are their stories. pic.twitter.com/9LlJBmHKEb

Waiting for my food and see this worker dressed up for Halloween @AsteriskTour pic.twitter.com/Y9rIM16Fnk

Mark it down, baseball fans: Only 150 days and counting until the Houston Astros take the field against the A’s at the Oakland Coliseum on Thursday, April 1, 2021. You already know what to wear.