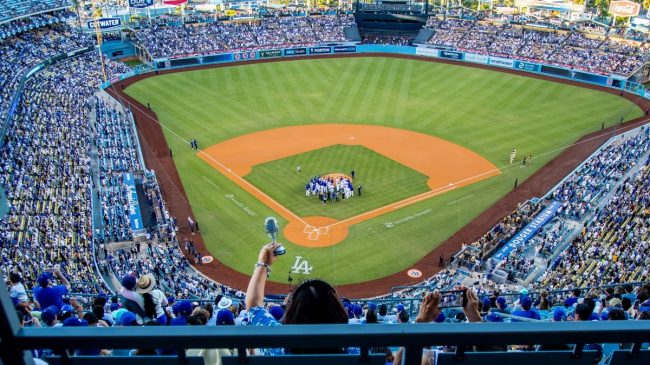 The Los Angeles Dodgers have been running away with this season since the beginning. For that reason, the fans absolutely love watching and cheering on their squad, especially during home games. However, one guy pulled a fast one on Dodgers security and he might be the slickest MLB fan of all time.

This Dodgers Fan Is The Slickest Man Alive

Luckily, someone was recording with their phone as a man is seen being escorted out by security. It doesn’t appear to be that serious of a situation, as it’s a lone security guard leading the Dodgers fan out of the stadium. However, watch this guy pull the slickest move ever to remain in the game.

The most agile man on the planet pic.twitter.com/fIympm2w61

The last time we saw a trick that smooth was an old Looney Tunes episode of Buggs Bunny messing with Elmer Fudd. He just sits down, takes off the hat, and immediately cheers for the Dodgers as if he’s been sitting there the whole game. That random fan next to him deserves an acknowledgment too. Guy sits down next to him and takes off his hat too so his new friend blends in with the crowd.

The video is cut short so we don’t get to see the ending to this story. We just hope it actually worked and this random Dodgers fan watched the remainder of the game from that seat. The security guard had to of eventually doubled back, right? Either way, this is one of the best highlights we’ve seen all season even though the Dodgers are tearing up the MLB right now.