In Classy Move, Dodgers Renew Contract Of Troubled Outfielder Despite Him Not Playing Since 2018 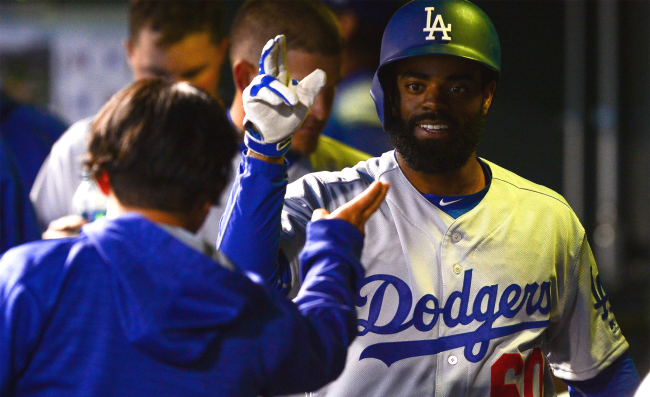 Toles appeared to have a bright baseball future ahead of him, but there were numerous signs that not all was right.

After being drafted in the third round by the Tampa Bay Rays in 2012, Toles was named the Rays’ Minor League Player of the Year in 2013.

However, in 2014, Toles was pulled from a game for not hustling, then left the team without permission and was placed on the inactive list, missing the final two months of the season.

In 2015, he attended spring training with the Rays, but was released before the season for disciplinary reasons and did not play any baseball at all that year.

Toles, however, did come back and in 2017 was the Opening Day center fielder for the Dodgers, who had acquired him, until May 9 when he tore the ACL in his right knee, ending his season.

After playing 17 games with Los Angeles in 2018, Toles no showed spring training in 2019, but did finally report on April 30 for extended spring training. A month later he was gone again and has not played in a game since.

In June of 2020, Andrew Toles was jailed after being found sleeping behind a Florida airport, looking like a shell of himself in his mugshot.

Last week, in news that flew way under the radar amidst all the big name signings, the Los Angeles Dodgers renewing the contract of Andrew Toles at the new league minimum salary of $700,000.

Once a starter in playoff games, Toles has not played in a pro game since 2018. On Thursday the Dodgers renewed Toles' contract so he has access to health insurance pic.twitter.com/vxgODc9zX6

This is the third time the Dodgers have renewed Toles’ contract, allowing the troubled outfielder continued access to the mental health services and insurance he has needed since being diagnosed with bipolar disorder and schizophrenia in 2018.

Last June, Bob Nightengale of USA Today wrote, “The Dodgers won the World Series last year, but while they were celebrating on the field in Arlington, Texas, Toles was in a hospital room in Florida. Toles is unaware of the Dodgers’ accomplishment, his family says, unable to watch baseball or anything else on TV, let alone talk about baseball.”

Morgan Toles, Andrew’s sister, said about his condition at the time, “He’s not really living, but just floating. It’s almost zombie-like. I don’t know if he’ll ever get better. None of us do. But, at least, we’re not worrying whether he’s alive.”

Andrew has been in at least 20 mental health clinics since 2019. Thankfully, for him and his family, the Dodgers have not forgotten him.