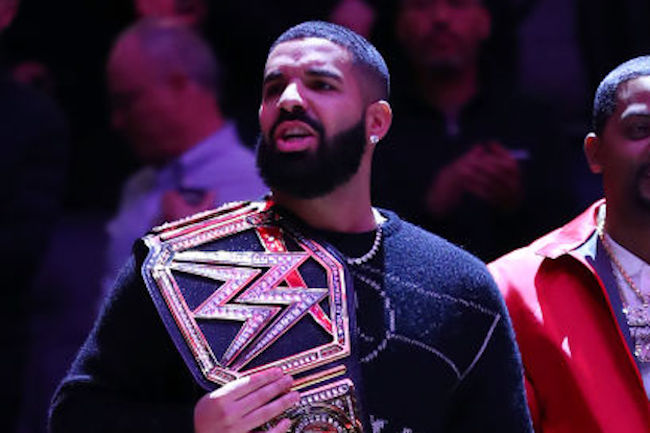 There is perhaps no one on the planet who exemplifies the concept of a bandwagon fan quite like Drake, a man who has seemingly used the massive amount of wealth he’s amassed over the years to buy the jersey of every single team in existence in an attempt to ensure he can publicly throw his support behind them whenever he sees fit.

A couple of years ago, the artist got tattoos honoring Steph Curry and Kevin Durant when both men still played for the Warriors, which was a curious development when you consider the Raptors named him their “global ambassador” in 2013.

As a result, things got slightly awkward last year when both of those teams faced off in the NBA Finals but Drake ultimately threw his support behind his hometown team and spent the entire series trolling their opponents by picking lint out of Steph Curry’s hair, posting a shirtless picture of Klay Thompson on Instagram, and generally antagonizing the Warriors at every opportunity.

The rapper had already begun to work on his trolling skills when the Raptors took on the Bucks in the Eastern Conference Finals and taunted Giannis Antetokounmpo to a point where one of the Greek Freak’s reps called him out for being “disrespectful.”

On Tuesday, the two teams faced off again in Toronto and Drake rolled into Scotiabank Arena with a couple of WWE championship belts in tow in an apparent attempt to remind the Bucks—who are currently sporting the best record in the NBA—who’s still technically on top.

.@Drake is in the building and brought two WWE belts. pic.twitter.com/er0qBFop4L

It also appeared he was taking a shot at Antetokounmpo, who has repeatedly channeled his inner wrestler over the course of the season and most recently unleashed a brutal assault against the Wizards’ mascot.

Milwaukee ultimately walked away with a 108-97 victory and Antetokounmpo got the last laugh after the game when he pulled a Mean Girls and wondered why Drake is so obsessed with him.

Giannis on Drake trolling him with the two championship belts:

"That's good. He cares about me. I really don't [care about him]. I'm just here to win games and help my team win. That's all."

The Bucks just clinched a spot in the playoffs and it’s only a matter of time until the Raptors do the same so I can only hope we’re treated to a postseason rematch to see where things go from here.