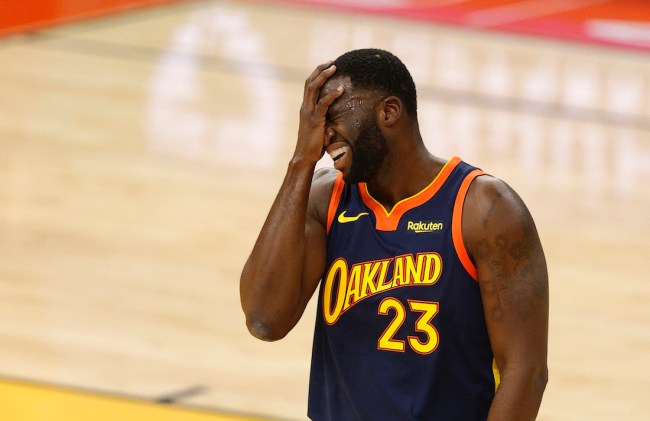 If there’s one thing we know about Warriors forward Draymond Green, it’s that he never, ever shuts his mouth. Whether it’s trash-talking an opponent, going after his own teammates, or sharing his thoughts on pretty much anything under the sun, the 30-year-old refuses to sit on his thoughts. That can be bad, but, as a fan, it’s also sort of a welcome sight.

For the record, I personally despise Draymond. Sure, mad respect for his game, but he comes across as a whiny AF most of the time. But that’s mostly from my experiences watching him say dumb stuff for the four-straight times his Warriors met my Cavs in the NBA Finals. That said, his mouth helped rejuvenate LeBron James in 2016, so maybe Green isn’t all that bad, right?

Here’s the thing about Draymond Green, though: As irritating as he can be when running his mouth, he also brings up some good points. Like, when he dogged Kevin Durant when the two were teammates, sure, it ruffled feathers and was a big deal, but it was also kind of the right thing to do, because Dray just wanted to feel like KD was all in with the Dubs that final year together.

Fast-forward to more recently, and Green voiced his (very strong) opinions about a real issue in the NBA: The process of trading a star player.

Following the Warriors’ game against the Cavs Monday night — where Cleveland benched two-time All-Star Andre Drummond as they look for a trade partner for him — Green went in on that philosophy, saying the NBA’s got a double-standard when it comes to teams deciding to sit guys before a trade, and when star players request a trade and get fined for trying to stand their ground. He compared it to the James Harden-Rockets fiasco, and how the former league MVP was fined from the league for missing training camp and games.

“And yet a team can come and say, ‘Oh, we want to trade a guy.’ And then that guy is to go sit. And if he doesn’t stay professional, then he’s a cancer. And he’s not good in someone’s locker room, and he’s the issue.”

“At some point, as players we need to be treated with the same respect and have the same rights as the team can have. Because as a player you’re the worst person in the world when you want a different situation. But a team can say, they’re trading you and that man is to stay in shape, he is to stay professional, and if not his career is on the line. At some point this league has to protect the players from embarrassment like that.”

Draymond calls out the NBA's double standard for players who request a trade vs. teams who sit a player in order to trade them pic.twitter.com/nKcbKvA2MM

Draymond Green is 100 percent right here, because teams do get treated differently than players when it comes to trade requests. In the situations Green references, Harden and Drummond, the former wanted out of Houston so badly that he was willing to skip training camp to literally party in hopes that the team got fed up and traded him. Sure, it was a bad look for Harden — and it didn’t immediately work — but, eventually, he got shipped off to Brooklyn in a blockbuster deal. But that wasn’t without the potential of fines from the team and league.

Compare that to Drummond’s situation and it’s like apples and oranges. The center wants to play for the Cavs, and he’s being forced to sit because the front office is looking for a trade partner and wants to keep him healthy. It’s absolutely a double-standard, and one that further proves that billionaire owners hold all the cards over millionaire players.

Look, I get it, when a player signs a contract, that’s looked at as being iron clad that sad player will honor it. But situations change, and the deal a guy signed two years ago may look different now if a team goes through a rebuilding process. That often leads to the player wanting out — especially if he’s a superstar. But the organization has to be held accountable as well, and allow that guy to play if he’s healthy and willing to do so, no matter what sort of trade conversations may be taking place behind the scenes.

So it’s on Adam Silver to find a way for things to change. The Commissioner should listen to Draymond Green here and figure out how to fix the issue. Whether that’s fining teams for benching healthy players during trade talks, or just not allowing teams to do so, it’s a conversation Silver needs to discuss to protect his product. It’s one thing to punish teams for the whole load management thing, but it’s another to punish them for protecting a healthy asset during trade talks. Let’s figure it out, guys.