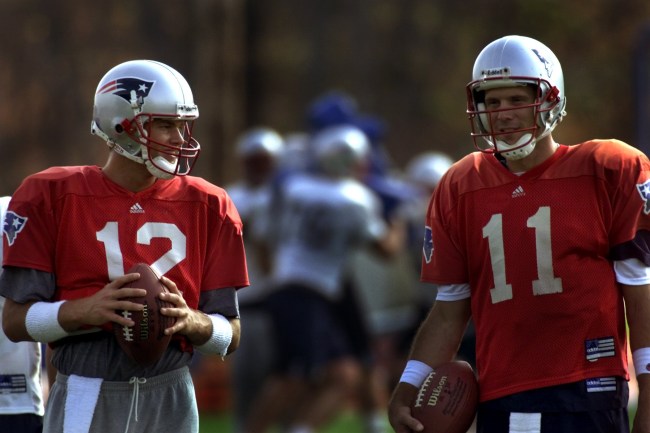 Drew Bledsoe was the No. 1 overall pick of the New England Patriots in the 1993 NFL Draft, with the franchise believing the record-setting NCAA passer from Washington State would serve as the face of the franchise for decades to come. While Bledsoe was a great quarterback during his time in Foxborough — which included a few Pro Bowl appearances and even a trip to Super Bowl XXXI against the Green Bay Packers — he suffered an unfortunate injury in 2001 that opened the door for some guy named Tom Brady to take over.

While we know how that all turned out, as Brady replaced Bledsoe for good and has gone on to become the absolute GOAT, the two have remained pretty cordial and close over the past few decades. And, given the rumors floating around about what Tom Brady’s future might hold — with teams like the Cowboys to the Dolphins to the Chargers being talked about as options for the six-time Super Bowl champ to land this offseason — Drew Bledsoe gave an interesting take to consider.

As part of an E:60 feature with ESPN that’s releasing this week, the former NFL quarterback was asked about the relationship between Brady and head coach Bill Belichick, which is widely presumed to be tense, to say the least. Both guys are alphas, meaning they may want the opportunity to show they can win without one another.

In Bledsoe’s eyes, though, the Tom Brady-Bill Belichick tension might actually be something that the future Hall of Famer actually enjoys, which, in essence, could lead him to remain with the Patriots instead of looking elsewhere. Take a look at what Drew Bledsoe said about the topic below.

“You’re talking about Tommy. He knows 100 percent that if Belichick feels like he can replace him at a lower number with somebody that’s going to give him comparable production, that’s it.

“In terms of their relationship, you know you work with somebody for 18 or 19 years or whatever — I mean, it’s not always going to be warm and fuzzy. Especially when it’s Belichick, who’s not warm and fuzzy to begin with, particularly in a work environment. So is there some tension? I’m certain that there is, but that stress and tension can drive attention to detail. It can drive work ethic.

“Belichick’s great at creating that discomfort. And to be honest with you, I think Tommy thrives on it.”

That’s pretty interesting insight from Drew Bledsoe, don’t you think? While some athletes have egos and want to prove they can win without the help of a legendary coach, the all-timers can swallow that pride when realizing that that coach actually knows how to get the best out of the player. We’ve seen it before with Kobe Bryant and Phil Jackson in the NBA, and Derek Jeter and Joe Torre in MLB, with both duos refusing to go on their own in order to stay together and compete for titles — regardless of who got credit.

Could Brady come to a similar realization with Belichick, leading him to stay in New England? It’s extremely possible, because, as we all know, the grass isn’t always greener on the other side, so Drew Bledsoe presents an interesting factor to think about as the rumors about Tom Brady’s future continue to float around in the coming months.