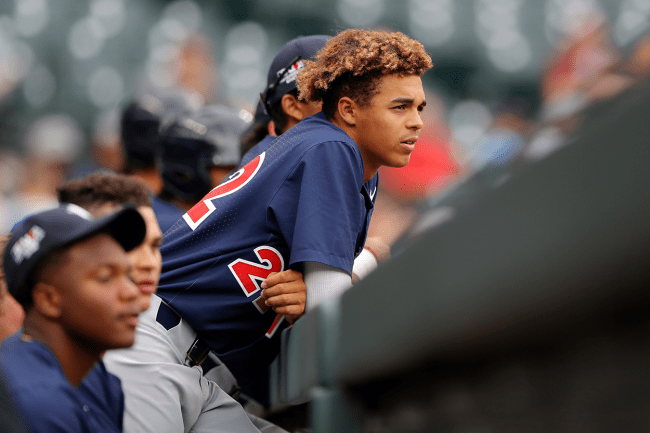 Wesleyan baseball is the 2022 Georgia High School Class A Private state champion. The Wolves dominated their way through the state playoffs and capped things off with a definitive two-game series win on Tuesday.

At the forefront of Wesleyan’s lineup is Druw Jones, the son of former 10-time Gold Glove-winner Andruw Jones (who is wrongfully not a member of the MLB Hall of Fame). Jones, who is currently committed to Vanderbilt, is the No. 1 college recruit in the nation and projected to go No. 1 (maybe No. 2) overall in the upcoming MLB Draft.

Earlier this year, Jones silenced “overrated” chants by mashing a HUGE home run, and has hit a lot of very, very long home runs all year. There is a very good chance that he does not end up on campus in Nashville as a result.

Either way, wherever Jones ends up next season, he will enter as a state champion. The Wolves swept North Cobb Christian 3-0, 18-3 on Tuesday.

During the two games, Jones played really well. Unlike his father, who was not a big triple hitter, the younger Jones legged one out in Game 1 and looked incredibly smooth while doing so.

#VandyBoys ‘22 CF Druw Jones(@WesleyanWolves) didn’t take long for the 5 tool prodigy to show his advanced hitting approach. Does a great job getting his hands above the baseball to level out the swing plane for this up & away 90 mph FB. Watch him glide into 3B. @NathanRode pic.twitter.com/IeDLBa0Cbp

Later in the evening, just like his father, he showed off the glove. Jones tracked a deep fly ball to center and made a smooth, seamless over-the-shoulder catch that the vast majority of centerfielders— let along high schoolers— could make with such ease.

Look at this catch by @jones_druw 👀

Very few people in the world make this play, and most of them are in MLB.

That glove will be dipped in gold many times in the years to come. pic.twitter.com/jwFpS96Mix

Needless to say, Jones is the top guy for a reason. Maybe he will be the first in his family to reach Cooperstown?