Length Of Dustin Johnson’s LIV Golf Contract Revealed, And What It Means For The Future 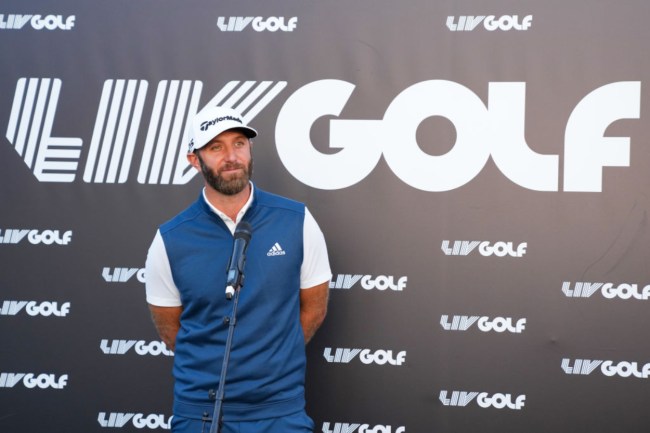 Everyone knew that the Saudis were going to offer obscene amounts of money to lure the top players on the planet to join LIV Golf. So, when it was reported that Dustin Johnson was paid a sign-on fee of $125 million, people weren’t all that surprised.

However, there was still a question to be answered here: how many years did Johnson commit to in order to receive said sign-on bonus.

While most assumed Johnson signed on for at least two years, it turns out he committed to four, according to Sean Zak of Golf Magazine.

Dustin Johnson said he has committed to FOUR years of LIV Golf events.

If we assume the $125 million sign-on fee will be paid over the course of those four years, that’s a yearly payday of $31.25 million dollars for Johnson. In the current format of the LIV events, winners of each event take home $4 million while everyone else in the field is guaranteed at least a six-figure check to simply show up.

Johnson and other LIV golfers will earn a fortune, in the most literal meaning, over the course of a season.

The two-time major winner committing to four years with LIV sends a very clear message to the golf world, and that is that the Saudis don’t plan on going away anytime soon.

At this time, with the inaugural event underway in London, LIV Golf doesn’t have a TV deal and has zero sponsors. In other words, LIV Golf is not making money, but when you have a blank check the size the Saudis behind the operation do, you’re not worried about making money.

Four years of not making money is a long time. The Saudis could very well pack it all up, say ‘screw this golf thing,’ and move onto another sport or project two weeks from now, a month from now, or two years from now, but it’s clear their plan isn’t to just be a flash in the pan.

LIV Golf hanging around for four years and inevitably poaching more and more top players is the last thing the PGA Tour wants to see.