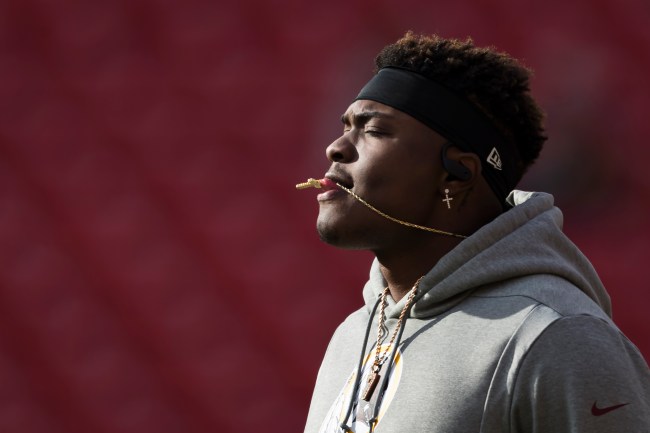 When the Washington Redskins selected quarterback Dwayne Haskins with the No. 15 overall pick in the 2019 NFL Draft, they obviously hoped the signal-caller could become the face of the franchise. While the debate’s still out about the former Ohio State product being that — he’s only entering his second season, is about to embark on a new coaching staff and only has a small sampling size of regular season games — Haskins is at least acting as if he’s ready for the challenge.

After entering the league a little bit hefty and soft with a reported playing weight of 230 pounds, Dwayne Haskins has more than slimmed down this offseason, shedding an incredible 11 pounds and seven percent body fat to look more svelte. In fact, if you compare Haskins’ body today to the one he had a few months ago, one might be confused that the new and improved frame is that of former league MVP Cam Newton — who is one of the most cut players in the entire league.

Need some proof? Just take a look at the images below that show all the lean muscle Haskins has developed this offseason, while losing some of that unnecessary weight.

Still just 23 years old, Dwayne Haskins looks as if he’s priming himself for a big 2020 campaign — assuming we actually have an NFL season. And, with a new coaching staff to prove he’s worth investing in for the long-term, it’s a good plan of action by the soon-to-be second-year player to get himself in wicked shape.

Given Haskins’ Cam Newton-like body transformation, Redskins fans are probably dreaming of the team’s new head coach, Ron Rivera, utilizing the young signal-caller in a similar role. Remember, Rivera coached Newton for eight seasons in Carolina, so having a quarterback with a nearly identical frame might serve the team well.

It’ll be interesting to see if Dwayne Haskins’ hard work helps him on the football field, but, seeing how much effort he’s putting into getting leaner, proves he’s willing to do what it takes to keep his starting gig and try to be better.