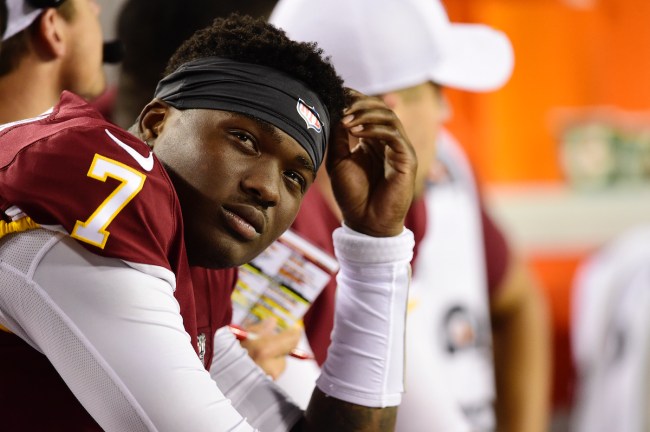 It’s been a forgettable NFL season for Dwayne Haskins. Not only did the former first-round pick find himself struggling on the field for the Washington Football Team, but he also messed up off the gridiron, too, with pics capturing partying with a bunch of strippers maskless for a birthday party following a late-season loss to the Seattle Seahawks.

As much talent as Haskins presumably has, the whole birthday party thing really pissed off the Washington Football Team, with the franchise releasing the quarterback just 18 months after choosing him No. 15 overall in the 2019 NFL Draft. Lasting just 16 total games in two seasons for the organization, Dwayne Haskins showed some flashes of competency leading a team, but, overall, he ended his time in D.C. with a win-loss record of just 3-10 as a starter, and a TD-INT ratio of 12-14. So, yeah, not great.

Like most NFL busts, Haskins struggled with, you know, actually being a professional football player, and fully understanding what that entails. Unlike other levels of football, guys find out quickly how much work is necessary to succeed in the league, and how they can’t just get by on talent alone. Sadly, the former Ohio State player hasn’t figured that out yet, and his off-the-field stuff and drama on the sidelines made him expendable.

Now that Haskins is a free agent, a few teams have been linked to him. The latest is the Pittsburgh Steelers, who, per Ian Rapoport, were hosting the quarterback on Thursday.

After seeing Dwayne Haskins struggle in D.C. and pretty much flame out, you just know NFL fans had plenty of reactions to the NFL free agency update here, with people taking to Twitter to laugh about Pittsburgh seriously considering signing the quarterback to (possibly) replace an icon in Ben Roethlisberger should he retire. Take a look below at some of the reactions on social media to the news.

Everyone hoping for a QB in this draft is about to lose it pic.twitter.com/PHzFcKiLoa

Nobody knows for sure what the 38-year-old Roethlisberger’s going to do, but, seeing how he handled himself following the Steelers’ Wild Card loss to the Browns — where he was seen crying — it appears as if the two-time Super Bowl champ may have reached the end of the line in Pittsburgh. The Steelers have Mason Rudolph on the roster, but, apparently, the team may be thinking that adding Dwayne Haskins to the quarterback room would create a healthy competition for the starting gig should Ben call it quits.

Regardless of what ends up happening Haskins has some damage control to do in order to repair his image and change the perception that he’s just another entitled 20-something who wasted his NFL opportunity. Whether he gets an opportunity with the Steelers or another team, the long leash he had in D.C. is about to get really short with whatever team he plays for next.