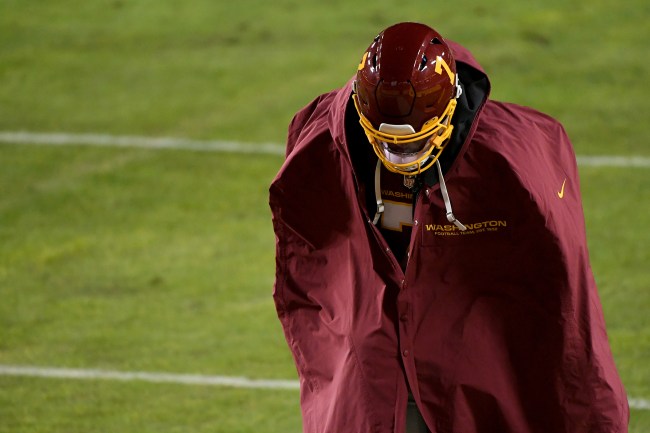 It’s hard to imagine what’s going on in Dwayne Haskins’ mind today, just 24 hours after his 20-month stint with the Washington Football Team ended. After being selected No. 15 overall in the 2019 NFL Draft — and reminding the teams that passed on him that they messed up in doing so — the quarterback is a free agent hoping to get another shot in the NFL.

Still just 23 years old, there’s a good chance Haskins signs with another franchise prior to the 2021 NFL season. He has too much physical talent not to be in the league, and, as we’ve seen with players like Jeff George, Ryan Leaf and Jameis Winston over the years, organizations always give second, third and (sometimes) fourth chances to guys who know how to sling a football; regardless of their past troubles.

But Dwayne Haskins sure has to remake himself before an NFL franchise and/or head coach trusts him enough to be the face of its franchise. Not only did the quarterback snap selfies on the sidelines in 2019 after his first NFL victory, but, more recently, he was seen maskless with strippers following a Washington Football Team loss to the Seahawks in Week 15. That led to some discipline for the franchise before, ultimately, less than 10 days later, the team flat out released him.

So what made the WFT decide to just cut its losses and move on from the former first round pick? According to a Washington Post article published Tuesday, lots and lots of headaches.

Written by Les Carpenter, the Post article details some of the things the organization dealt with during the past 20 months, and really paints Haskins as a prima donna who was straight up lazy. Take a look below at some of the alleged issues.

Mostly, though, his Washington tenure was filled with odd incidents such as missing the final snap of his first NFL victory because he was taking selfies with fans, or the photos that emerged last week of him partying maskless, a violation of league coronavirus protocols. There were loads of complaints by frustrated coaches on two staffs who were stunned by his constant late arrivals to meetings, failure to master the playbook and refusal to prepare for games as diligently as NFL quarterbacks must. Several around the organization questioned his ability to lead and repeatedly said poor throws in practice would carry over into games.

What annoyed members of both (former Washington coach Jay) Gruden’s and Rivera’s staffs, people familiar with their thinking say, is that Haskins was not rude or indifferent. They never described a player who was arrogant, despite such suggestions outside team headquarters. Instead, they seemed confused as to why he wouldn’t do the things most quarterbacks do instinctively — arrive early to the team facility, sit for hours in meetings and study opponents deep into the night. He had a sharp mind and grasped plays quickly but had trouble applying them in games. Some of the coaches blamed this on a lack of preparation.

It’s one thing to be actin’ a fool and not have any talent — that happens all the time. But it’s another thing to be doing so and believed to have the ability from coaches to grasp everything being asked. It’s clear Dwayne Haskins just seemed to ignore coaching and worked off his own schedule. Whether it’s true or not, it paints him as an entitled player who didn’t think the WFT would release him in such a short matter of time. Welp, he was wrong.

Raw talent has gotten tons athletes to the pros, but, as most of us know, it’s the work ethic of the great ones in other aspects of the sport that make them all-timers. Coming early and staying late. Watching film. Staying disciplined. Going above and beyond what’s asked of them. Haskins didn’t seem to grasp that part of the game. He may at some point, but he doesn’t have it right now.

With WFT owner Daniel Snyder reportedly fascinated with Dwayne Haskins leading up to the 2019 NFL Draft, that put the young signal-caller in a strange position, and almost made him the owner’s new pet. That probably gave Haskins a false sense of security — which ran out with his release.

“You don’t want to be the pet of the owner, especially this owner,” said one person familiar with the dynamics of how Haskins was chosen.

Dwayne Haskins isn’t the first athlete to reportedly be late to meetings, be a little lazy and sort of spiral out of control. He won’t be the last. So while his time with the WFT is over, here’s to hoping he latches on with another NFL franchise soon and can resuscitate his career and show he’s more than what this latest report makes him out to be: A bust.