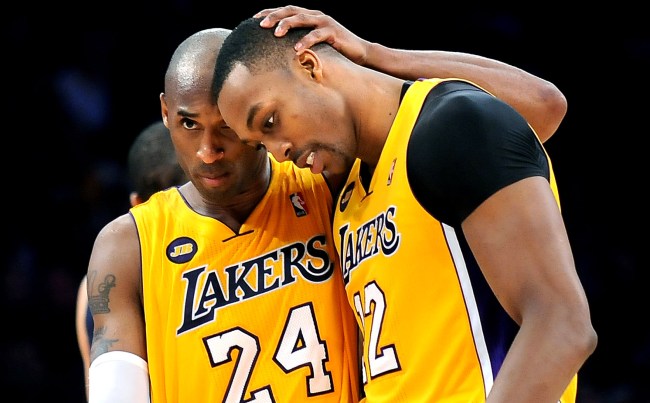 NBA stars Dwight Howard and Kobe Bryant had their issues – both as teammates on the Los Angeles Lakers and as opponents.

In 2014, Bryant was famously caught on video calling his former teammate “soft as a motherf**ker” during a game between Los Angeles and Houston.

Six years later, Howard revealed that in hindsight Bryant’s criticism was not only warranted, it is appreciated.

“I think at that time I was ignorant to the level that he was at. So I appreciate you, Kobe. Thank you for saying I was soft. I didn’t realize what you meant until now,” Howard told FS1’s Kristine Leahy.

On Saturday night after LeBron James passed Kobe for third place on the NBA’s all-time scoring list, Howard made some remarks which not only showed how much he now appreciates the game and what Kobe accomplished in his career, it also was eerily prophetic.

“We don’t appreciate each other as much as we should as humanity,” Howard told reporters. “Something like that should be appreciated. We should appreciate people while they’re alive, and accomplishments like that is something we don’t typically see.”

Dwight Howard said this last night after LeBron passed Kobe on the all-time scoring list: "We don’t appreciate each other as much as we should as a humanity. Something like that should be appreciated. We should appreciate people while they’re alive." pic.twitter.com/2bxWmSiW3O

During the summer of 2019, after it was announced that Howard would be returning to the Lakers for another run, Shaquille O’Neal and Kobe were trading barbs.

Kobe had claimed during an interview that he could have won 12 NBA championships if Shaq’s “lazy ass was in shape.” Fans thought they were seriously beefing, but the two former NBA stars squashed that concern real quick, with Shaq sideswiping Howard along the way.

It’s all good bro, when I saw the interview, I thought you were talking about Dwite, is that how u spell his name lol

Kobe’s response was simple, but he refused to pile on.

In fact, Bryant even ended up offering Howard some advice for his return to the Lakers, saying, “I think he’s ready for this next time around to do whatever is necessary to help the team be successful, and I think he’ll do it.”

Howard and Kobe had even mended their relationship enough that the Lakers big man was even lobbying for Bryant to help him in the dunk contest this year.

Little did Howard know that his comment about appreciating people “while they’re alive” would prove to be so poignant just 12 hours or so later.