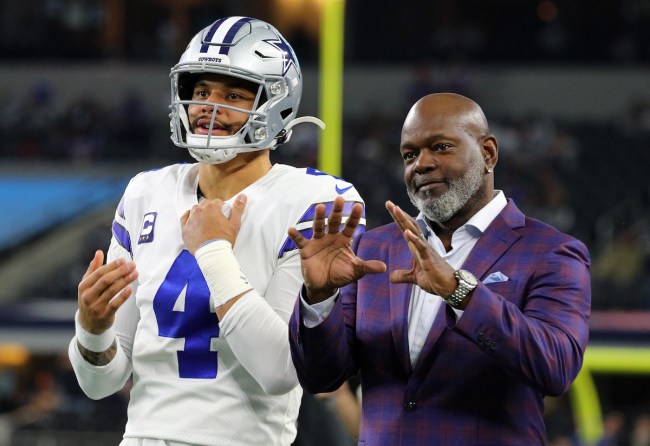 Dak Prescott and the Dallas Cowboys still haven’t come to terms on a new deal. Rumors spread last week that the team was going to dump the injured quarterback in June or possibly put the franchise tag on Prescott one more time.

After the franchise tag rumors hit the internet, former Cowboys star Troy Aikman spoke his peace about the team tagging Prescott for a second time.

Hot on the heels of Aikman wondering what the hell the Cowboys are doing with Prescott comes Emmitt Smith being absolutely blunt about the situation in an interview with Bleacher Report.

“As a former player who has been in situations similar, I always ask myself this question – and this is what people should be asking of some of these people making the decisions – why would you want him to be committed to you if you’re not committed to him? He’s looking for your commitment to him,” Smith told Adam Lefkoe of Bleacher Report.

Smith believes that the way Jerry Jones and the organization have treated Prescott thus far shows that they’re probably just not committed to the quarterback. And not just because the quarterback was left out of a recent video hyping the 2021 season.

“He has proven to be the quarterback for the Dallas Cowboys, but are you unsure? By you delaying this process it says to me you aren’t sure about the future of Dak Prescott with the Cowboys.”

Smith makes a valid point. Why would Prescott want to be with a team that seems like they don’t really want him?

The Cowboys have until March 9 to use the franchise tag on Prescott.