Yep, The Patriots Just Got Even Better As They Acquire Mohamed Sanu From The Falcons 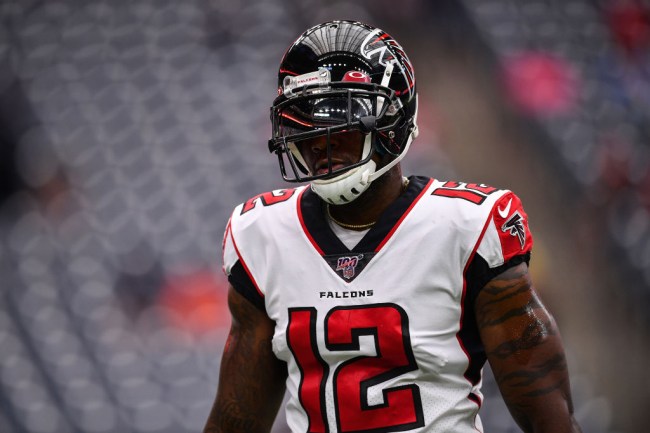 The New England Patriots absolutely embarrassed the New York Jets 33-0 on Monday Night Football and hours after the dominating performance the 7-0 Pats got even better.

Tom Brady has himself a new weapon in Mohamed Sanu as the Pats sent a second-round draft pick to Atlanta for the 30-year-old wide receiver.

Another trade: Falcons are sending WR Mohamed Sanu to the New England Patriots in exchange for a second-round pick, league sources tell ESPN.

Sending the Falcons a second-round draft pick may sound like a little much for Sanu, but he is exactly what the Patriots need.

New England’s defense is completely loaded, clicking on all cylinders and even made Sam Darnold say ‘I’m seeing ghosts’ during the Monday Night Football terror show. There isn’t anything to tinker on that side of the football, but it’s worth the risk to add a productive piece to the wide receiver group in New England.

Brady and his offense may already rank fifth in the NFL averaging 297.7 passing yards per game, but in normal Patriots fashion, they’re doing it without a fully healthy or overly impressive group.

Josh Gordon is still out with knee and ankle problems, Julian Edelman (ribs) and Phillip Dorsett (hamstring) are both playing banged up and rookie Jakobi Meyers rounds out the wide-out group. Yeah, safe to say adding Sanu at the very least won’t worsen this group, he’s a nice addition.

Sanu has just 33 catches for 313 yards and one touchdown on the year, but then again he’s been a part of a bad 1-6 Falcons team. The New Jersey native should find his stride again in the Patriots offense with Brady throwing him the ball.

The Falcons clearly need to enter a bit of a rebuild mode this offseason and getting a second-rounder for Sanu is a step in the right direction on that front.

As for the Patriots, well, they’re just going to Patriot as usual. New England may have slightly overpaid, but it got better and gifted Brady another reliable guy to throw to.

The NFL was already on notice about the Pats, as always, but the Sanu acquisition just sounded the alarms.

There is only one #NFL player that has thrown a touchdown to both A.J. Green and Julio Jones.

Here are the highlights of QB Mohamed Sanupic.twitter.com/P9ejQlepFQ