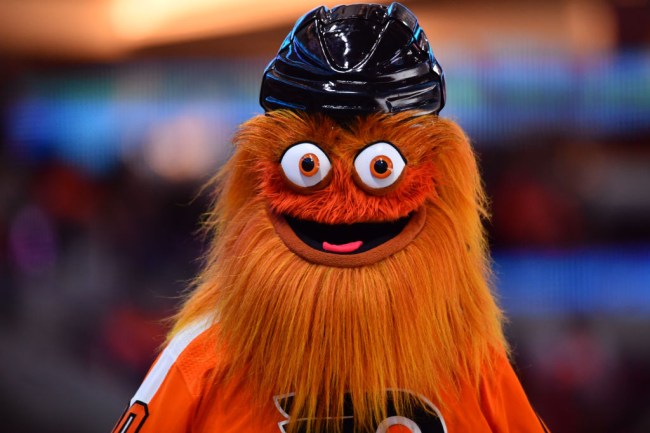 The Philadelphia Flyers are one of those sports teams with a name that doesn’t exactly lend itself to an obvious mascot but the organization nonetheless tried to get in on the action coming off of its second consecutive Stanley Cup in 1976 when it introduced the world to “Slapshot.”

Hearing that the growing speculation of the Flyers introducing a mascot is true, but unsure what it is. Team has only had 1 mascot, short-lived in 1976, called Slapshot. pic.twitter.com/SoClWPSqXy

However, Slapshot didn’t last long and was unceremoniously retired after a season that marked the beginning of a decades-long mascot and championship drought.

The Flyers still remain on the search for another Stanley Cup to this day, but in 2018, the team welcomed a new costumed representative to its ranks when the rink at Wells Fargo Center split in two and revealed an abyss descending straight into the depths of the underworld that birthed the ungodly creation that was dubbed “Gritty.”

Gritty got off to a bit of a rocky start but the people of Philadelphia welcomed their orange-bearded hellspawn with open arms, as he quickly got his own beer and saw his image permanently inked on various body parts of fans who fell in love with the overnight icon.

Gritty has been an incredibly consistent source of entertainment over the last couple of years thanks to the various shenanigans he’s engaged in, whether it’s trying to catch the attention of Kim Kardashian or, most recently, mocking the Astros over the sign-stealing scandal that rocked baseball.

Am I doing this right? pic.twitter.com/p3EQZzvYbD

However, it appears Gritty has found himself in a bit of hot water, as reports began to circulate on Wednesday that the mascot is at the center of a police investigation for allegedly punching a 13-year-old fan during an event in November.

According to The Philadelphia Inquirer, Chris Greenwell and his son Brandon headed to the arena to meet Gritty during an event organized for Flyers season ticket holders, where the mascot took a picture with the duo before running after them as they walked away and punching the teenager in the back “as hard as he could.”

Greenwell said he reached out to the Flyers, who were unable to confirm the veracity of his claims. The team offered to make it up to him and his son by offering to let Brandon sit on the bench during warmups but their discussion eventually went south and the father filed a complaint with police, which is currently looking into the accusations.