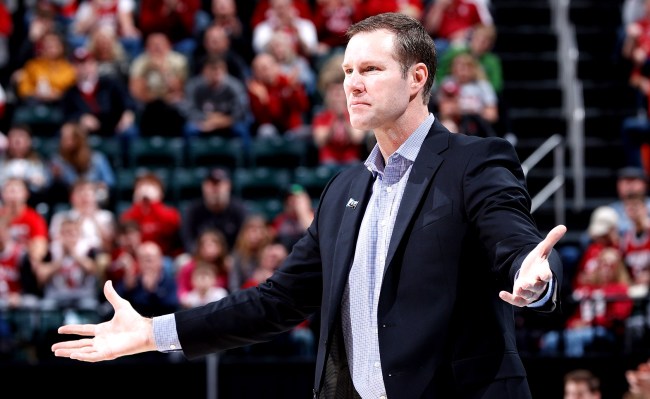 University of Nebraska head coach Fred Hoiberg looked visibly ill while coaching his team during the Big Ten Tournament on Wednesday night, eventually leaving the court in the second half and being transported to a local hospital.

Following the game, his players were forced to remain quarantined in Bankers Life Arena after the game was over, even being brought food as they awaited word on their coach’s diagnosis amid widespread concern that he had contracted the coronavirus.

The players were eventually allowed to leave and were not told to self-quarantine when news came back that Hoiberg had been diagnosed with influenza A and had been released from the hospital.

In a statement from Nebraska Athletics, it was stated that Hoiberg had been checked by medical personnel prior to coaching the game and was given the go ahead to participate.

Hoiberg’s son Jack , who plays for Michigan State, also posted on Snapchat that his dad “got cleared before the game to coach.”

Many fans watching the game were shocked to see Hoiberg coaching when he clearly looked like he was not feeling well and questioned why he would put his team, the other team, and everyone else around him at risk.

WHY IN THE HELL DID FRED HOIBERG COACH THIS GAME? https://t.co/aK5B4FCin7

I don’t get why Hoiberg and Nebraska felt him coaching the game sick tonight was a good idea given all that is going on. Nebraska was 7-23. They weren’t winning anything. So unnecessary.

Why the hell was Fred Hoiberg on the bench while feeling that sick IN THE MIDDLE OF A F@&$ING PANDEMIC?!?!?! Hope he’s fine but I hope even more that he didn’t get his team, staff and their families sick. Stupid decisions like that are how people die.

Thursday morning, Hoiberg released a statement addressing his illness and decision to coach the game.

“Please let it be known that I would never do anything that would put my team, family or anyone else in harm’s way,” Hoiberg wrote. “I was feeling under the weather on Wednesday and we felt the right thing to do was to get checked by a tournament doctor prior to our game in the Big Ten Tournament against Indiana. Once that medical official cleared me, I made a decision to coach my team.”

Considering the circumstances the world is currently under, some people didn’t accept his reasoning.

Coaching a game while ill when there’s a pandemic going on? Yup, that would be putting people in harms way.

Sorry, no. If you were “feeling under the weather,” you shouldn’t have needed to ask a team doctor to check you so could be cleared. You should have just said to yourself, “I’m sick, so I’m staying home,” and left it at that. You made the selfish call.

The CDC says if you don’t feel good stay home. I think you were wrong in coaching last night. pic.twitter.com/pUgnDwOUKx