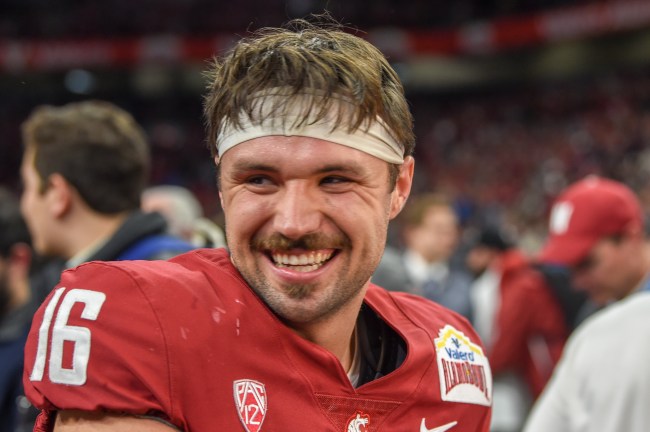 Gardner Minshew might only be a rookie who has only played in three games for the Jacksonville Jaguars, but it seems as if the sixth-round pick has become the darling of NFL fans so far this year. Sure, it helps that the dude looks like a ’70s adult film star thanks to his stache and shaggy hair, but it’s also easy to root for the guy given his rise from overlooked signal-caller in this year’s draft to starting for the Jags.

Whether it’s enjoying Gardner Minshew’s game, trying to relate to his badass swag, seeing how his entire family seems mythical — like his jacked dad, who stole the show on Thursday Night Football — or laughing at how Minshew was offered a $1 million endorsement deal from an adult entertainment company, people have Gardner mania. It’s like this kid was put on the planet to get headlines.

Like most pro athletes, Minshew’s football journey is pretty interesting, as the guy sort of went the untraditional route through college football scene on his way to the NFL. After starting his collegiate career at East Carolina, just two years ago, Gardner was close to signing as a grad transfer to play for Nick Saban and the Alabama Crimson Tide. That’s when Washington State’s ever-so-delightful head coach Mike Leach swooped in, though, raking in Gardner Minshew by being about as blunt as possible in order to convince him to come to Pullman.

Speaking on The Rich Eisen Show, Leach said he didn’t mince words with Gardner Minshew when recruiting him after his East Carolina days, blatantly telling him he’d have a better opportunity to play with the Cougs than with the Tide.

Leach: “About the time we sorted out that we want to recruit him, he’d committed to Alabama. So we figured we’d call him anyway, because we knew we threw it more than Alabama did. So we called him up and said ‘hey, do you want to hold a clipboard at Alabama or do you want to lead the nation in passing?’ And he came to Washington State.”

Rich Eisen: “Is that how you put it?”

Leach: “Oh yeah. I’m not a beat around the bush kind of guy.”

You’ve got to love this from Mike Leach. The guy is as candid as humanly possible, always offering an A+ soundbite that somehow turns into a solid story. Without a doubt, he’s the most colorful college football coach on the planet, and it seemed fitting that the eccentric Gardner Minshew was able to pair up with him during his one season as a grad transfer.

From stretching nearly naked in the locker room to airing it out under Leach’s potent offense, Minshew excelled in Pullman, and now he’s proving he has what it takes to succeed in the NFL. It’s pretty awesome stuff.