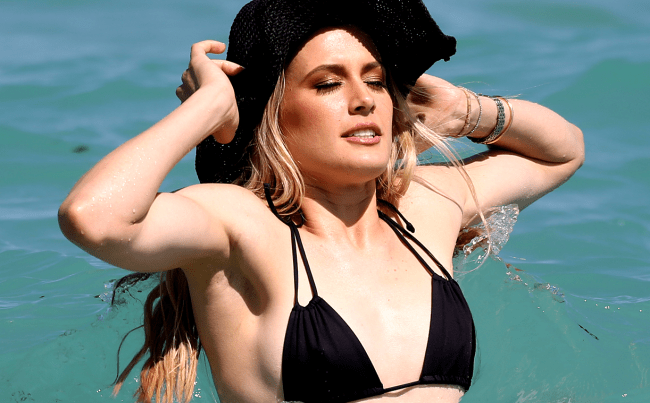 Tennis star Genie Bouchard, 28, has had several very interesting relationships over the past several years in her search for a partner.

Most recently, Bouchard dated Pittsburgh Steelers backup quarterback Mason Rudolph. While they were reportedly together for over a year, they kept things very much on the downlow before breaking up sometime in early 2022.

Prior to that, Bouchard tried all sorts of odd things to try and land herself a good man.

In 2020, like many of us, Genie was feeling lonely during the isolation of the pandemic and openly wished that she had a boyfriend.

As a result, someone with a lot of disposable income bid $85,000 to go on a dinner date with her.

A month before that, Genie agreed to go on a date with another fan after he pledged $4,000 to charity.

Most famously, in 2017, Genie Bouchard made a Super Bowl bet with a fan on Twitter and ended up not only going out with him when she lost, they actually dated for awhile.

Despite all of that, Bouchard is somehow still single (as is her twin sister Beatrice, go figure).

She discussed her difficulties with dating as a professional athlete this week on the premiere episode of the Golf, Mostly podcast with Michelle Wie West and Hally Leadbetter.

Bouchard is currently finishing up some rehab following shoulder surgery she had to undergo in 2021. That’s opened things up in her social calendar at least a little bit, but she knows that it’s only temporary.

“You can be normal, socialize, go on more dates than usual, but normally it’s very hard,” Bouchard said. “Now look, I’m going to be on the road for a month and just going to be in my room doing room service, hanging out with my coach so that’s what I’m foreseeing for the next month.”

So what exactly is Genie Bouchard looking for in a potential partner?

Definitely not one of these guys who appear in her DMs…

“I would say, definitely, I wouldn’t want to date someone in the tennis world because it would just be so much tennis, I feel like non-stop,” she revealed.

Though she did add, “On the one hand, they would probably relate with you more than anybody, but on the other hand, it’s like my friends. My friends are mostly out of tennis and I like to text or call someone and talk about totally different stuff than tennis because my entire day is tennis, so I feel like the same would apply to dating.”

Bouchard also admitted that “someone athletic is obviously ideal.”

“Respectful, but also confident,” Bouchard explained. “I think confidence is very attractive and someone who’s funny, personality matters. After a while, looks fade, and if this is someone who is going to be someone for the future, then you got to make each other laugh and be friends.”

During the course of her interview, they had an artist draw what Bouchard described as her “perfect guy.”

There you go, guys! If one of you looks like that, (a) wow, and (b) please let Genie Bouchard know because she is looking for you, apparently.