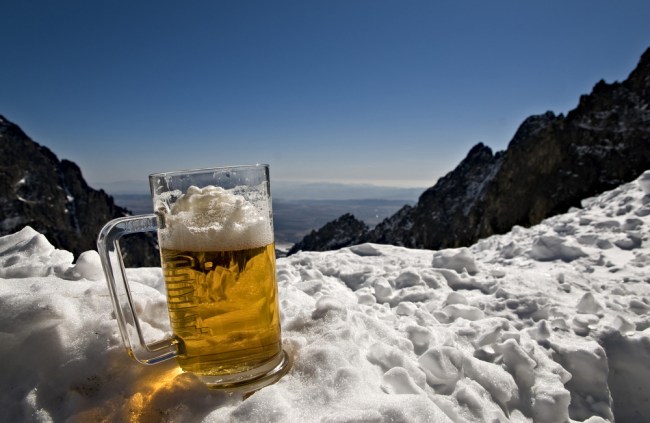 As of the time that I’m writing this, Germany is tied with Norway for ‘most gold medals’ at the 2018 Winter Olympics in Pyeongchang with 11 Golds and 23 total medals (2nd place behind Norway’s 29 overall). Germany is set up geographically to be really, really competitive at the Winter Olympics with the Alps, the Bavarian Alps, and two more large mountain ranges. But is geography enough to dominate the Golde Medal podium? No, it’s not. You also need to drink a ton of non-alcoholic beer.

A recent profile of Germany’s Winter Olympics team shows that drinking A TON of non-alcoholic beer while training might be their secret to success. They drink so much N.A. beer that the German brewery Krombacher sent 3,500 liters (~1,000 gallons) with Team Germany to the Winter Olympics.

Ben Crair and Andrew Key of The Bulletin report:

Scherr conducted a double-blind study in which he gave runners in the 2009 Munich Marathon nonalcoholic beer every day for three weeks before and two weeks after the race. These runners suffered significantly less inflammation and fewer upper respiratory infections after the race than runners who had been given a placebo.
“This was pretty surprising to us,” said Scherr, who published the results in the peer-reviewed journal Medicine & Science in Sports & Exercise.
If nonalcoholic beer helped athletes recover more quickly from grueling workouts, then it could allow them to train harder. Scherr credits the nonalcoholic beer’s salubrious effects to its high concentration of polyphenols, immune-boosting chemicals from the plants with which its brewed.
“After that, we really had the proof: It’s really healthy and not only a marketing gag,” said Holger Eichele, chief executive of the German Brewers Association. (via)

What they’ve found is non-alcoholic beer is healthy, isotonic, and it aids in recovery from rigorous workouts. According to the article, research suggests the health benefits of drinking non-alcoholic beer extend beyond Winter Olympics. Chilean researchers found that drinking N.A. beer before working out helped soccer players stay more hydrated than drinking beer and water.

It seems as is drinking non-alcoholic beer can aid in any type of sport where inflammation might come into play (so, mainly sports with an endurance component). To read more about the health benefits of non-alcoholic beer you can CLICK HERE to read the article on Bend Bulletin.