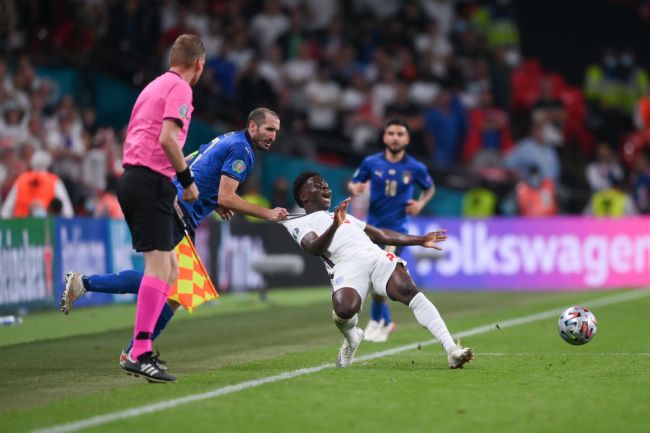 Truth be told: even before coming across this story, I’d seen the below video and wondered to myself what Giorgio Chiellini was muttering to himself just prior to the Buyako Saka’s decisive penalty kick in the Euro 2020 Final. Having suffered through watching those very same penalties (albeit under the influence of far more beer), I know *I* was yelling things before Saka’s PK. Things such as “Calma Gigi”, attempting to encourage the Italian keeper, or “You’re a bum!” in an effort to discomfort Saka. Hey, it worked, didn’t it? But it’s rare that you see players on the pitch yell anything, as they’re usually too consumed by the stress and tension to utter a sound. Just look at Chiellini’s stone-faced compatriots by his side.

As it turns out, Chiellini was apparently putting a South American curse on the 19-year-old Arsenal winger, with the veteran 36-year-old Juventus centerback even confirming as much to ESPN Argentina.

Slow-motion footage captured of the Azzurri’s players during the moment Donnarumma clinched them the trophy shows Chiellini mouthing ‘Kiricocho’ before the 36-year-old then races away to celebrate.

‘Kiricocho’ is a term that originates from South America, and is believed to translate into English as ‘curse you’ or ‘jinx’.

Chiellini was quizzed on whether or not he used the curse by ESPN Argentina, and the veteran promptly owned up with a wry smile on his face.

‘Ciao, Cristiano,’ he told a reporter. ‘I confirm everything to you. Kiricocho!’ [via DailyMail]

Chiellini’s admission on adds to the lore of the soon-to-be 37-year-old defender, as the stalwart Italian previously made headlines for his treatment of Jordi Alba prior to the penalty shootout victory over Spain in the semi-final.

Jordi Alba, not so much. pic.twitter.com/yjl04Ngtvw

The more you learn about the guy, the more you’re happy for him that he got the international trophy that his generational career so rightly deserved.

RELATED: Italy Defender Leonardo Bonucci Once Chased Down A Gun-Wielding Robber, May Actually Be A Madman