The Green Bay Packers Would Be Stupid Not To Replace Aaron Rodgers With Chad ‘Swag’ Kelly, An Essay: 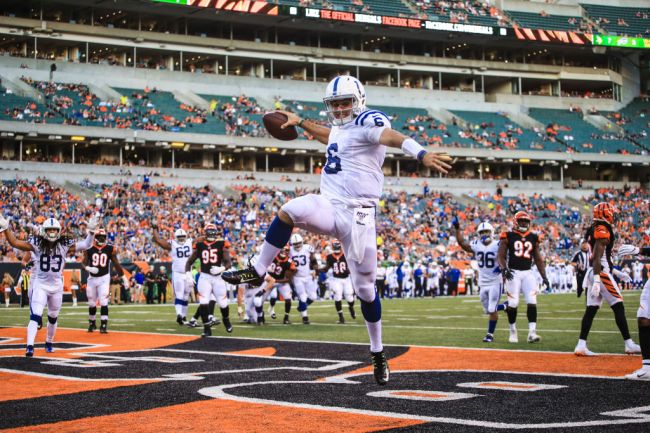 All signs point toward Aaron Rodgers’ time with the Packers being over. He’s still salty that the team drafted Jordan Love, pissed off with the front office for cutting one of his favorite wide receivers, turned down the biggest quarterback contract in the NFL because he hates the general manager, and has threatened to retire. He wants out of Green Bay. So who should replace him?

Well, the obvious answer is Love, who the team traded up to select in the first round of the 2020 NFL Draft. If Rodgers retires, or gets traded without the team receiving another arm in return, the 22-year-old is the only other quarterback on the roster. However, it’s also the wrong answer.

The Packers begun to explore options to bring in at the position for OTAs and training camp earlier this month, and it looks like the organization has two targets in mind: former University of Virginia and East Carolina quarterback Kurt Benkert, and former Clemson, EMCC and Ole Miss quarterback Chad ‘Swag’ Kelly.

The #Packers are bringing in QBs Kurt Benkert and Chad Kelly for this weekend’s rookie minicamp on a tryout basis, per sources.

As Green Bay GM Brian Gutekunst noted after the draft, they'd need an extra arm or two with only 2 QBs on the roster. Benkert, Kelly get a look first.

Benkert spent two years in Atlanta as a backup and could be great in that role, or as a third-stringer. But he’s not the guy. Swag is.

Kelly, who you might know best as the nephew of NFL Hall of Famer Jim Kelly, has had a tumultuous time in the league thus far. That’s okay though because he can ball. At 26 years young, Kelly most recently was throwing lasers at Ole Miss’ Pro Day in late March. Look at this dime he dropped to New York Jets second round pick Elijah Moore.

If one throw from a staged workout in a controlled environment doesn’t sell you, like it did for the Jets on Zach Wilson, let’s look at what he did in college. During his only full season in Oxford, Kelly led the Rebels to a 10-3 record and decisive Sugar Bowl victory over Mason Rudolph’s Oklahoma State. He led the SEC with 4042 yards and 31 touchdowns through the air, topping eventual NFL starters in Dak Prescott, Kyle Allen and Will Grier. He also ran for 509 yards and 10 touchdowns. Add in a road victory over Alabama and it’s a wrap.

Never forget that Chad Kelly, who is trying out with the Packers this weekend, threw one of the most insane TD passes in history to beat Alabama 🤯pic.twitter.com/azFdYHQT44

Comparatively, Eli Manning threw for 3,600 yards and 29 touchdowns during his best year at Ole Miss. Sticking with comparisons, Kelly’s 4,542 yards of total offense in 2015 has only been out-gained by an SEC quarterback twice — both times by Johnny Manziel, WHO WON THE HEISMAN TROPHY! In 2016, Swag threw for 2,758 yards and 19 touchdowns before his season was cut 14 quarters short.

Prior to his time with the Rebels, he started his collegiate career with Clemson, but was dismissed from the team for a dispute during the Tigers’ spring game. He was battling for the starting quarterback job with Cole Stoudt and Deshaun Watson, and wanted to go for it on fourth down.

His offensive coordinator said no. Kelly lost his lid, got benched, and was dismissed after another incident later in the week.

What did he do instead? Well, Kelly went to East Mississippi Community College (of ‘Last Chance U’ fame) and won a junior college national championship, casually throwing for 3,906 yards and 47 touchdowns (!!) along the way. Did I say that the dude can ball?!

After getting things sorted out at Ole Miss (with only a few incidents), he was drafted by Denver and played four years between the Broncos and Colts. He never threw a pass in a regular season game but that didn’t keep him from dominating in the chances he received. Rocket arm, sneaky wheels.

Prior to the 2020 season, Colts head coach Frank Reich was impressed with Kelly and gave him a lot of praise.

“I cannot tell you how happy we are with Chad,” he said. “He’s progressed a lot as a quarterback. He really works hard at it. He knows how to fight. He’s a good teammate. He has worked with Phil Simms. He’s really worked hard at his craft and continuing to improve.”

Nonetheless, he was cut in favor of Philip Rivers, Jacoby Brissett and Jacob Eason.

Of course, I’d be remiss not to mention the funniest off-field incident of them all, which saw him suspended in May of 2019. Kelly got a little too lit at Von Miller’s Halloween party, stumbled into the house of someone he didn’t know and sat on the couch next to the homeowners. He was chased out with a vacuum, dressed as Woody from Toy Story.

Swag has since cleaned himself up, and if there are guys like Antonio Brown in the league, what’s wrong with a guy who had himself a little bit too big of night on Halloween? I’m just saying…

The bottom line is this— Chad Kelly is a freak athlete who just hasn’t had his shot. He literally broke Sports Science.

You guys ever see the ESPN Sport Science when Chad Kelly put up the highest score of any QB they've ever tested? 👀 pic.twitter.com/OayGTux3Hl