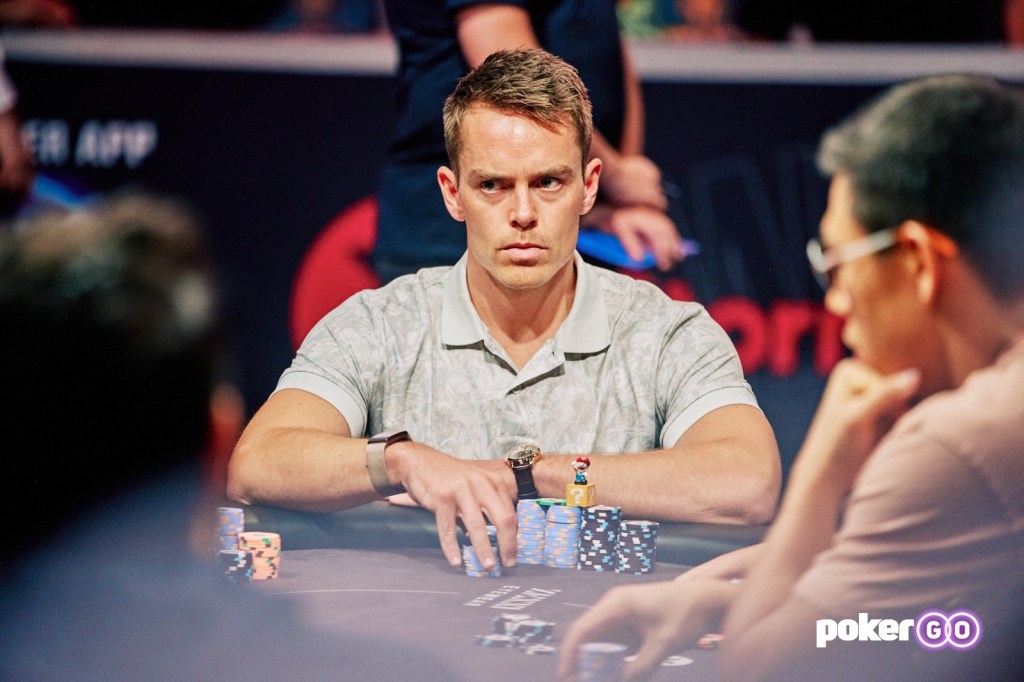 Norway’s Espen Jorstad outlasted a near-record WSOP Main Event field of 8,663 players to win the most coveted event in all of poker, the $10,000 MAIN EVENT No-Limit Hold’em World Championship. In doing so, Espen Jorstad won $10,000,000 for first place which immediately put him at #20 on the World Series of Poker all-time money list, which goes to show just how lucrative winning the main event is these days.

The final three players of the Main Event came down to Michael Duek of Ft. Lauderdale, Florida, Adrian Attenborough of Smithfield, Australia, and Norway’s Espen Jorstad. This was on their 9th day of playing an event that actually spanned over two weeks due to multiple Days 1 and 2.

The Hand That Changed The WSOP Main Event For Espen Jorstad

As the WSOP Main Event field whittled down to the final 10 players, Espen Jorstad was tied for the chip lied with Matthew Su of Washington D.C. Of those final 10 players at the final table, 6 were international and 4 were from the US to give you a sense of how far-reaching the Main Event is.

Espen was in the driver’s seat for most of the WSOP Main Event final table despite a few changes in chips. But it was this moment on Day 7 of the Main Event that really and truly led to him winning it all.

With just 15 players remaining, all vying for the $10 million first prize, Espen Jorstad looked down to find pocket rockets (AhAc). His opponent across the felt, Austria’s Tom Kunze, looked down to find AdKs. Kunze is a relative newcomer to the WSOP scene but had previously cashed at the 2022 World Series of Poker in this Summer’s Event #37: $1,500 MILLIONAIRE MAKER No-Limit Hold’em. And in this hand, he had 21 million more chips than Jorstad.

After the cards were flipped it didn’t really get less stressful for Espen Jorstad. He had a 92% chance to win the hand pre-flop with AA vs AK but the flop came out with JcQs2s giving Kunze a straight draw and a back door flush draw.

The turn served up the 8d which ended Kunze’s hopes of a flush but it still meant if a 10 came on the river it would be the end for Espen Jorstad. Alas, the dealer placed down the 7 of Clubs and eventual WSOP Main Event champion Espen Jorstad raked in a gargantuan pot of 89,400,000 chips.

Tom Kunze’s WSOP Main Event would begin to unravel after losing that pot. He finished in 14th place for a very nice pay day of $410,000 but fell just short of every poker player’s dream of making the final table of the Main Event.

Jorstad went into the final table tied for the chip lead with Matthew Su, each holding 83,200,000 in chips or 69 big blinds. With that many chips in play, it’s easy to lose track of how big the stack is in relation to the blinds so it’s good to think of it in terms of how many Big Blinds each player has in his stack.

WSOP Player of the Year Standings

After winning the $10K Main Event No-Limit Hold’em World Championship for $10,000,000 and the gold bracelet, Espen Jorstad earned 1,731.5 WSOP Player of the Year points. That, combined with his other points, put him at 39th in the Player of the Year race with 2,057.41 POY points total.

Meanwhile, poker pro Daniel Negreanu, one of the biggest names in the game, finished the 2022 WSOP DOWN $1.1 million. That’s a huuuuge loss for the Summer. And it was primarily driven by losing $500K in a High Roller event with a buyback.