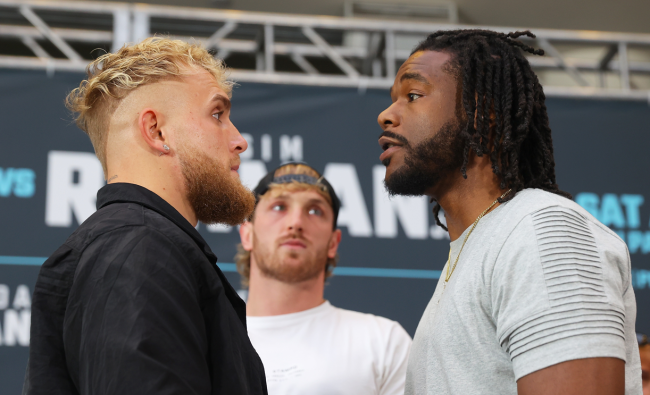 Hasim Rahman Jr. is accusing Jake Paul and his team of “shady” bullying tactics to get him to take the fight and, in turn, give Paul an advantage come fight night.

On Monday, during an appearance on The MMA Hour, Rahman shared the underhanded tactics he believes Paul’s team used.

“It was a little shady,” he said. “His coach called me, and he’s asking me how much I weigh, how I’m feeling about my last fight, what I’ve been doing in the gym, how much I’ve been sparring … but he was asking me under the pretense that I would come in and spar Jake as a southpaw for the Anderson Silva [fight].

“I’m thinking they’re about to call me back and get me on a flight to Puerto Rico to help them out for Anderson. An hour later, I get a call saying they want to fight. So all those questions were really trying to line me up to fight me. It was never a sparring situation.”

When Rahman asked for a few hours to decide if he wanted to take the fight with Jake Paul, he says he was told that he needed to decide right away.

“No, you have to respond within 45 minutes, before the top of the hour, or the offer’s off, and you’ll never get the opportunity to fight Jake Paul again,” Rahman said Paul’s team told him.

Rahman, who is 12-1 as a professional boxer (and is the first actual professional boxer Jake Paul will have ever faced), added that his contract with Paul stipulates that he has to forfeit 25 percent of his purse for every pound he is over the specified weight limit (200 pounds at the official weigh-ins and 214 pounds at noon on the day of the fight).

“They are that scared that they want to put that much pressure on me to make the weight to say you’re going to lose 25 percent for every pound you’re over,” he said.

Paul and Rahman have met in the ring before, with Hasim being a paid sparring partner for Jake.

On August 6th inside the ring at Madison Square Garden, things will be very different, says Rahman.

“I was actually was asked by your coaches not to knock you out,” he says he was told at the sparring session. “I was told that if you knock him out, you’re most likely not going to get paid.”

Come fight night, however, Rahman says, “I’m going to hit him as hard as I can hit him. … I think he’s bit off more than he can chew.”