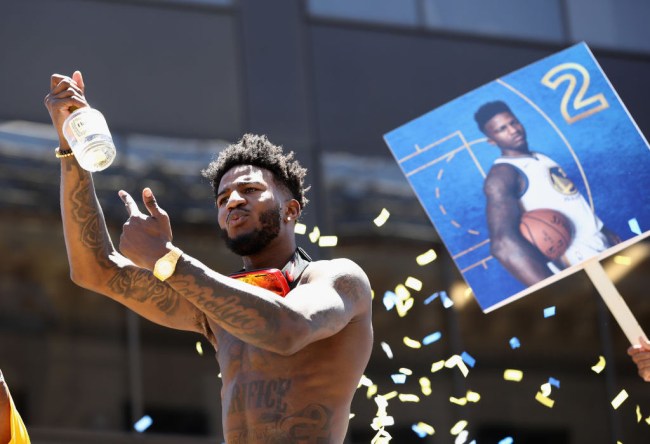 Last week, the Golden State Warriors celebrated their most recent NBA title with a championship parade through the streets of Oakland. It was a fantastic day for fans and players alike, including Jordan Bell, who decided to honor the occasion and live his best life by ripping off his shirt, donning a pair of ski goggles, and drinking a bunch of Hennesey.

Unfortunately, disaster struck during the parade when Bell realized he’d run out of cognac, and he began frantically searching the crowd in the hopes of getting his fix. Thankfully, at least one fan along the route had decided to celebrate in the same way as Bell, and the Warrior tracked him down and proceeded to chug from the bottle of a total stranger.

Thankfully, it appears Bell won’t have to worry about running out of his beloved liquor of choice anytime soon. Over the weekend, he posted a picture to his Instagram story featuring a dozen bottles of Hennesey in various shapes and forms that were sent to him by the company.

Warning: the following picture may result in feelings of resentment and extreme jealousy.

If you’re wondering, Bell made over $800k last year, which is just slightly less than the $900,000 the Warriors reportedly dropped on booze while celebrating their most recent victory. I hope he can exercise some self-control to make sure he has some left if the team gets to hold yet another parade next year.