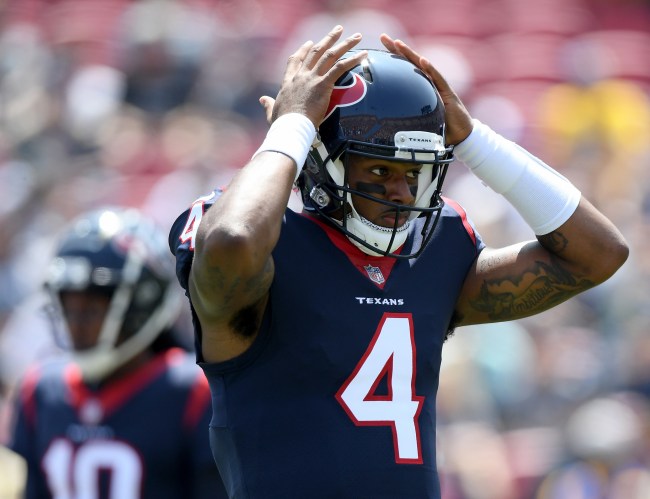 With the Houston Texans firing Bill O’Brien after an abysmal 0-4 start to the NFL season — along with some pretty questionable decisions as the team’s general manager (ahem, trading DeAndre Hopkins this offseason) — it’s officially silly season when it comes to their upcoming search. While former defensive coordinator Romeo Crennel was named interim head coach, he’s just a stopgap until the Texans can really go all in and hire the candidate they want most.

Look, the Texans might suck ass right now, but there are a lot of things to like about the job, meaning any head coach should be excited about what’s left on the current roster. There’s Deshaun Watson at quarterback — who’s locked up for a long time after his recent extension — and there’s J.J. Watt as an anchor on the defense, so it’s not as if the team doesn’t have talent.

But who’s the person who can come in and maximize that talent the most? Well, how about current Clemson Tigers head coach Dabo Swinney, who has been linked to several NFL head coaching gigs in the past year or so; although there’s no indication that Dabo is even interested in leaving the college ranks, despite the multiple reports that he could be targeted by NFL teams. In fact, the Clemson head coach said he laughed at a rumor linking he and current quarterback Trevor Lawrence to the Jacksonville Jaguars last month, per AL.com.

Asked for a reaction on Tuesday, Swinney — who has never coached in the NFL, even as an assistant — dismissed the idea of leaving Clemson for the NFL.

“Reaction was just — laughed at it,” Swinney said, via 247 Sports. “Had a little fun with Trevor, but man, I’m not worried about the AFC or NFC. I don’t even know what they are.”

However, according to CBS Sports, Swinney would be a prime candidate for the Houston Texans head coaching gig, with the most obvious reason being his relationship with Watson, whom he coached at Clemson (and won a National Championship with during the 2016 season), and also called a “Michael Jordan” kind of prospect. In other words, Dabo considers the quarterback as a once-in-a-generation talent. But CBS Sports outlined a number of other reasons why Swinney could be the choice, which you can see below.

Dabo Swinney: HELLO. Swinney is apparently also close with Easterby — how the connection was established I’m not sure, but undoubtedly it was only strengthened over the last two years with Easterby working closely with Swinney’s old quarterback Watson. Would the Clemson coach bounce for the NFL? He will likely lose Trevor Lawrence after this season and maybe he wants to take a shot at the professional level (after potentially walking off with another title). Swinney called Deshaun a “Michael Jordan” type and you don’t get many chances to work with a former quarterback who won you a national title in his prime at the next level. Plenty of people will question if Swinney can be an NFL coach given his energetic style but plenty of people questioned whether Swinney should be the next coach at Clemson. That didn’t work out well for the doubters. Worst case it ends up like Nick Saban in Miami and Swinney can go replace Saban after he retires from Swinney’s alma mater!

Man, there’s a helluva lot to unpack there. Not only does CBS Sports mention Dabo Swinney’s name with the Teaxns’ gig, but, before even confirming him to be a candidate, they already unravel his future by declaring the guy as a possible replacement for Nick Saban at Alabama should he a) fail and b) Saban retires in the next few years. Sure, it makes sense since Dabo’s alma mater is Bama, but, sheesh, this is a lot of speculation.

Look, the Houston Texans are going to do everything they can to pique the interest of Swinney — as they should, given his relationship and history with Deshaun Watson and the team’s executive vice president of football operations, Jack Easterby. But is he the absolute leader to actually accept the job? It’s doubtful, given the family-like, wholesome atmosphere that Dabo’s created at Clemson, which is a perfect schtick in the college game, but might not be well-received by millionaire NFL players.

Swinney won’t leave Clemson for money, because he’s the highest-paid college football coach in the country, earning $9.3 million annually, but, if there’s one NFL job that would seem to appeal most to him, it’d be the Houston Texans’, where he’s got some talent at different positions and a Pro Bowl quarterback in Watson. I put the odds of it actually happening at about 35 percent — so let’s just wait and see how this all plays out.