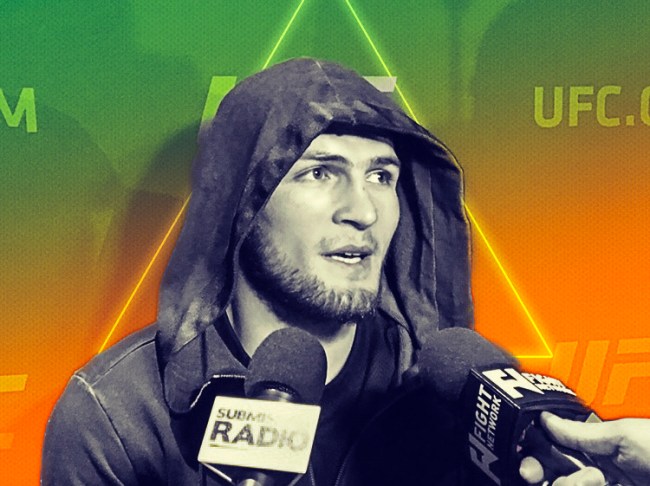 Presented in partnership with BETMGM

Here’s the truth about betting on the UFC 254: Khabib vs. Gaethje fight. Even the oddsmakers don’t know how to handicap this fight card. That, or they’re just being lazy.

Big fights often bring big bets at the sportsbook, but outside of the UFC 254 PPV main event between Khabib and Gaethje, the rest of the card is a real mystery.

However, before we delve into the rest of the card, it’s imperative to examine the odds in the UFC 254: Khabib vs. Gaethje main event. That’s where most of the action is coming in anyway.

As a gambling man, I never recommend betting against someone who is 28-0 and has become one of the most dominant fighters in history. Khabib’s record and reputation precede him, and even though he’s a big favorite at -357, it’s still a secure bet as any out there.

The issue with betting on Khabib at UFC 254 is that there isn’t a ton of money to be made on him. You’d have to bet $357 in order to make $100, so if you’re starting with a big bank roll and looking for an incremental bump, this might be the way to spend your betting units.

However, there’s another strategy at play here, and that’s taking the underdog, while hedging your bets.

At +275, Justin Gaethje is a live dog — he’s an underdog with a realistic shot at playing the spoiler — so if you’re into small bets, why not put a few bones on the challenger. The payout is pretty good.

Now, where I say bones, other gambling “experts” may say units. Let’s call a unit $10, just for simple math. If you put $20 on Gaethje and he wins, you walk away with your initial cash, plus $55. It’s not big, big money, but we’re encouraging the kind of gambling that makes the fight more interesting, not the kind of gambling where you’re betting the money you need for that insanely high electric bill and groceries. This is entertainment, not a necessity, so we always need to have some mention somewhere of what responsible gambling is.

For legacy! For gold!

The truth is, Gaethje is a longshot for a reason, so if you take a chance here, you’ll need to hedge that bet elsewhere. Just remember Teofimo Lopez was a +315 underdog last week against Vasyl Lomachenko, and look how that worked out.

Of course, I looked like a genius last Saturday when the $20 I put on Lopez cashed. Unfortunately, my love of parlays caught up with me the very next day when I bet on the New York Giants to cover the spread against the Washington Football Team.

Clearly, I’m starting to digress here, but that brings me to parlays.

Parlays are a fun and interesting way to combo bets up to create a longer play. They only cash out if all your picks are right, but if you can find value, there’s definitely money to be made.

Often, parlays are best suited when comboing up favorites — I’m looking at putting two units on a Casey Kenney (-175) > Khabib (-357) parlay — but imagine a scenario where a couple of underdogs win back-to-back. That’s potentially a score.

In the case of UFC 254, I’m playing a super long shot by putting a unit on a parlay featuring Sam Alvey (+275) > Ion Cutelaba (+250). It takes some brass ones to take a shot like this, but remember, it’s a single unit, so we’re not risking much, with more room to hedge.

Now that I’m five units deep (there’s a joke in there somewhere), it’s time to whip out the final three units in my overall betting scheme, and that’s where things get a little tricky.

See, the oddsmakers seem quite stumped at UFC 254, making three even-money lines, or “pick ‘em” fights. In addition to the UFC 254 co-main event between Robert Whittaker and Jared Cannonier, two undercard fights: Stefan Struve vs. Tai Tuivasa and Alex Oliveira vs. Shavkat Rakhonov; are listed as even money. Personally, I call that pure rubbish, not only because Whittaker should be a favorite (that means it’s pretty good value to pick him here), but also because it just seems like they’re not doing their homework.

Truth be told, the majority of the money is going to come in on Khabib, with Gaethje a distant second, so it’s not that surprising that oddsmakers aren’t offering great betting lines, but if we’re trying to grow the culture of sports betting, lets have some freaking betting lines already.

As I mentioned, Whittaker is good for a unit here, as is Walt Harris, an athletic heavyweight who’s listed as a +150 underdog against Alexander Volkov (-175). What Harris lacks in length and experience, he makes up for in power and explosiveness. He knows he needs to fight on the inside, and he’ll bring it straight to Volkov.

So there you go, a few fun bets for UFC 254. No doubt BroBible is putting more thought into improving your UFC 254 gambling experience than the bookmakers themselves.

Enjoy the fights, and feel free to Venmo any tips.

Dan Shapiro is a writer, editor, musician, and producer currently based in Los Angeles. In addition to covering some of the biggest fights in combat sports history, he’s also hunted down the world’s best sushi, skied the northern hemisphere in July, and chronicled Chinese underground music for publications like CNN, the New York Daily News, VICE, and Time Out. Dan also conjured up a ghost at the Chateau Marmont while out on assignment for RoadTrippers. Follow him on Twitter here.
—