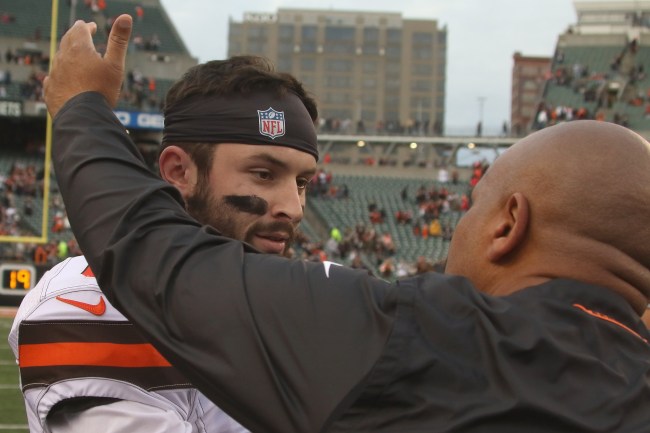 Hue Jackson is back in the news after his former first-year quarterback of the Cleveland Browns, Baker Mayfield, took a shot at him during a recent feature with Mina Kimes of ESPN. In the piece, Mayfield was asked about his saltiness towards Jackson last season after the head coach was fired by the Browns and hired by the AFC North divisional-rival Cincinnati Bengals. Jackson’s decision seemed to give the 2018 No. 1 overall pick even more motivation to play his best, with Mayfield telling Kimes that he wanted “to get revenge.”

While appearing on The Herd with Colin Cowherd, Hue Jackson was asked about Mayfield’s recent comments, and if anything the quarterback said seemed to affect him at all after going from the Browns to the Bengals. Here’s what Jackson said.

“It doesn’t bother me personally. Because, again, I’ve been in the National Football League for a long time, and I’ve seen a lot of different ways that people handle things. He has to do what he feels he needed to do, and that’s how he’s handled it. Again, everybody is going to handle things differently. That’s how he chooses to make sure that he’s ready to go, ready to play, or has his team ready to play. The Browns weren’t playing Hue Jackson. They were playing the Bengals.”

Jackson can defend his decision to go from the Browns to the Bengals all he wants to, but the fact that he went from one team to the other in a matter of two weeks just looks bad on him. Sure, he was asked to join Cincinnati’s staff, but the fact that he doesn’t understand why Mayfield and some of his former Cleveland players would be out for revenge shows how clueless he kind of is.

The first meeting between the two teams produced an awkward moment between Mayfield and Jackson, as the quarterback snubbed his former head coach during a postgame handshake. But that was just the beginning, because, in the second meeting a few weeks later, Mayfield stared down Hue Jackson on the sidelines from the field after a big play.

Considering Mayfield uses anything he can to create a chip on his shoulder and motivate himself, Jackson’s decision to join the Bengals probably wasn’t too smart. And, although Hue Jackson may think he didn’t do much wrong — and, in hindsight, he didn’t — when he claims that his 3-36-1 record as the Browns’ head coach was “some of the best,” well, it kind of seems like he has no idea about the current NFL.